So, I've mentioned Dark Castle Entertainment a couple of times already so you should all know the drill.  DCE was originally started for the purpose of updating the classic William Castle movies for a modern audience which is an awesome dream that was, apparently, doomed to fail because they only remade 2 of them.

The film that started it all for DCE, though, was House on Haunted Hill. 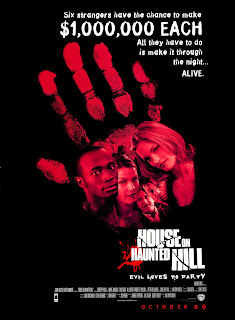 House on Haunted Hill started its life as a poor black-and-white child brought into this world by William Castle and Robb White.  Robb makes me think a combination of Mad Men and Robb Petrie because everyone needs a little Dick Van Dyke in their lives.  There should be martinis and smoking in the office.

ANYWAY, this horror classic starred Vincent Price (as all horror classics should) and is, basically, your standard "If you can stay the whole night, you get paid" story, originally found in the Grimm fairy tale "The Boy Who Could Not Shudder".  A group of people are led to the titular house and told that if they can spend the entire night in the house with the doors locked, they get $10,000.  Sounds easy, right?  Wrong.  There are ghosts and psychotic hosts and vats of acid and a whole lot of firearms and one of the BEST Castle gimmicks, EMERG-O which flew a plastic skeleton over the audience at appropriate times.  Many, many poodle skirts left the theater stained with urine.

Fast-forward to 1999, we're basically given the same story except BOTH of the hosts (Geoffrey Rush and Famke Janssen) are trying to kill one another and the "house" is an abandoned mental asylum... and we ALL know how much I love those.  Stephen Price (whose name and appearance are a nod to Vincent Price), a thrill-ride impresario,  and Evelyn Stockard-Price, Stephen's spoiled trophy-wife, are leasing the asylum from Watson Pritchett (Chris Kattan, whom I despise and is the worst part of this movie) for Evelyn's birthday party. 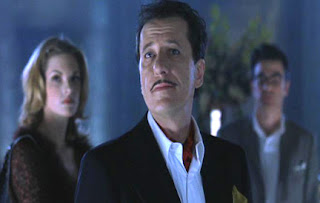 What kind of smug asshole holds his wife's birthday party in an old asylum?
This kind.

Then the weird starts.  The five people that show up?  Neither Evelyn nor Stephen know any of them.  None of them.  But being the asshole that he is, Stephen continues the party.  The theme?  Survive the night, go home with a million dollars with the cash from anyone that doesn't make it being added to the survivor's pot.  Sounds easy, right?

We DO know that at least one of them is a stupid bitch with a REALLY big digital camera.

Now, this being the late 90's, the door can't just be locked.  This building goes into full-on, ain't no radiation gettin' in here, prison-bitch lockdown. It won't open for 12 hours.

And there's something I haven't mentioned.  The place actually IS haunted by the former inmates AND the sadistic doctor Vannacut that caused the place to be shut down to begin with (played with silent and malicious glee by horror notable Jeffrey Combs). 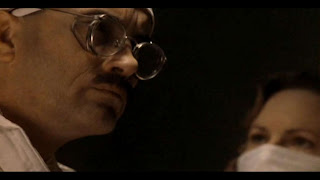 Oh, and the party favors?  Handguns.  It's a PARTY, now, bitches!

Now, I like this movie.  I don't LOVE it, but I don't hate it, either.  The characters are delightfully mysterious.  Why are they there?  How did they get an invite?  How do they survive the night without slapping Stephen and his disgusting little French tickler mustache?  The plot itself is simple and direct.  We're here to watch a horror movie and the update from the campy original is maybe not the freshest thing on the block in terms of plot but they kept the humor while taking it to a much darker place and I appreciate that.  Once again, your mileage may vary. 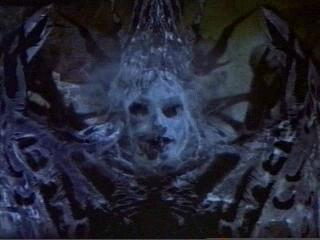 That watery ghost effect?  Awesome for the time.  A little dated, now.

One totally cool thing about the remake, though, is that Dark Castle Entertainment originally meant to release each movie with a gimmick and this is the only one wherein they followed through.  Instead of EMERG-O, there was a scratch-off game given with each ticket so that movie-goers had a chance to win some cold-hard cash.

I could use some cash right about now...

So, anyway, this is my last entry for the Ultimate Gore-a-Thon.  I know, sad face, right?  But it's still going on until tomorrow night at Midnight!  I'll still be posting links to my fellow bloggers' articles and I'd like to thank JD at Bloodsucking Geek for inviting me.  This was a LOT of fun and I think I've made a few friends out of the deal.  Hopefully they don't think I'm just a loudmouth asshole.  They wouldn't be WRONG but nobody likes to believe that about themselves.  :0-)