In continuing my discussion of remakes, I think I would be utterly remiss if I didn't broach the subject of David Cronenberg's 1986 MASTERPIECE, The Fly. 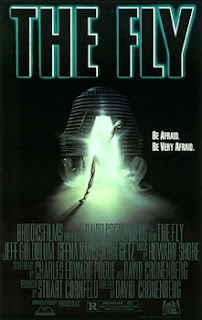 On August 15, 1986, the world was treated to a grand, delicious ice-cream cone of gore and AIDS/Pro-Choice metaphor with sprinkles and a cherry on top in Cronenberg's remake.  While Cronenberg was already known for body horror with Videodrome and The Brood, The Fly would cement him as its king.

The 1986 flick is NOTHING like the short story, by the way.  Imagine my surprise.  Also, just as a disclaimer, this movie is 27 years old.  The statute of limitations for spoilers has passed.

Our story begins with Seth Brundle (Jeff Goldblum, who, as fantastic as he is here, is a twitchy mother fucker that needs a sedative in everything else), brilliant but eccentric and kind of shy scientist, meeting Veronica Quaife (whose name makes me giggle and is played by Geena Davis who needs more work as I kind of miss her) at a "meet the press" event held by Bartok Science Industries, who provide the funding for Brundle's experiments. 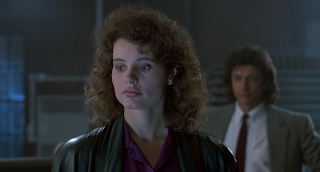 Already with the stalking, jeeeeeez...

Since this is the mid-eighties, they traipse off to Brundle's most excellent loft apartment where he gets Veronica's panties all moist with the sexy, sexy science.  See, he's built teleporter pods (telepods) that, thus far, can only transport inanimate matter.  So far, the "living things" part of the equation has eluded him and he could possibly have developed a taste for babboon stew because so far every time he's tried to teleport a babboon, it gets turned inside out. 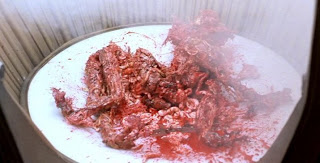 Apparently getting dick-deep in a be-permed amazon gets the brain juices flowing so he is finally able to reprogram the pods to successfully transport living material.  He wants to celebrate but Veronica bugs out on him and Seth, as lacking in social skills as he is, gets jealous and drunk.

Outside of Brundle's nerd rage, though, Veronica is actually confronting her ex, Stathis Borans (whose name is stupid outside of Game of Thrones and is played by John Getz, who has a fantastic beard), whom she is concerned is going to scoop her on the story because he, too, is a jealous douchebag.  While those two hash it out, Seth teleports himself, not knowing that the titular filthy insect is in the pod with him.

Because scientists don't think to check this sort of thing, apparently.  Nor do they program a teleporter to recognize more than one object.  Movie science be wacky and lacking in clean-room protocol, yo.

So, Brundle gets out feeling all new and clean and purified and powerful thanks to his new DNA.  He makes with the unsafe sexy-time with Veronica and suddenly, BAM!  'Roid rage.  He gruesomely snaps a guy's forearm in an arm-wrestling contest and snags the nearest hoochie for pelvis-pounding and she runs screaming when he tries to force her to use the pods and Veronica delivers the film's catch-phrase.  And then?  His fingernails start falling out.  He checks the computer and finds out that he now shares DNA with a fly and that there's no way to reverse it. 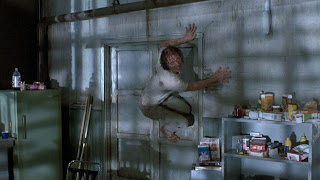 Plus, now he has to mop the walls.

The rest of the movie is a visual representation of the best descent into madness I've ever seen.  As much as I am not a fan of the Goldblum, his twitchiness lent that extra kick that forced me to believe him as he transformed from Seth Brundle to Brundle-Fly.  Of course, the Oscar­™-winning special effects, being spot-on, did their share, too. We see him transform from human to human-fly hybrid, complete with the disgusting removal of parts (kept in little jars) and discovering that he can't eat solid food, anymore, so he has to vomit enzymes onto his food and slurp it up like a shake.

On the Veronica side of the coin, she's a little panicky because she's now pregnant.  Brundle-Fly is gonna be a daddy and he begs her to keep the baby.  In a seriously awesome dream-sequence with Cronenberg himself playing the OB-GYN, Veronica does keep it and gives birth to a 3-foot-long maggot.  Eeeeeeeeew.  This causes Veronica to want to have an abortion in the worst way and she and Stathis convince a doctor to perform one in the middle of the night.  Brundle abducts her, Stathis tries to rescue her and gets his hand melted off with acidic puke.

Brundle-Fly eventually reveals his idea that he wants to be with his family in the worst way.  Like by fusing them all together into one body with the pods.  Veronica rips off his jaw and gets planted in Pod 1.  Brundle steps into pod 2 but Stathis manages to cut the power cables to Veronica's pod allowing her to escape but Brundle-Fly is now fused with sections of Pod 2.  Veronica puts him out of his misery and howls in anguish.

This movie, deservedly, was the most successful film in Cronenberg's career.  It was a HUGE financial success and the tragic love story it presented resonated with audiences.

In terms of the AIDS metaphor, though, Cronenberg didn't intend that.  The audiences took that away but he meant for a more generalized look at disease, aging and death.  On the subject, Cronenberg said, "If you, or your lover, has AIDS, you watch that film and of course you'll see AIDS in it, but you don't have to have that experience to respond emotionally to the movie and I think that's really its power; This is not to say that AIDS didn't have an incredible impact on everyone and of course after a certain point people were seeing AIDS stories everywhere so I don't take any offense that people see that in my movie. For me, though, there was something about The Fly story that was much more universal to me: aging and death--something all of us have to deal with."

All of that being said, this is a movie that, even barring Geena Davis' shoulder pads and unfortunate perm, stands the test of time.  It is a TRUE classic.  The sequel, not so much, but it wasn't bad.  This needs to be a part of everyone's collection.  There were rumors of a Cronenberg-helmed sequel (which would be a first because Cronenberg NEVER does his own sequels) but it seems that's been swatted.  He DID direct the operatic version of his film, though, which looks AWESOME and I think I need to see it.