In 2007, the squee heard 'round the world was every present/former techno-goth, noise rock, industrial horror-core kid in the world saying "ZOMGROBZOMBIE'SDIRECTINGHALLOWEENI'MGONNADIE!!"  I am not ashamed to say that I was one of them.  Because both Rob Zombie and the original Halloween are awesome. 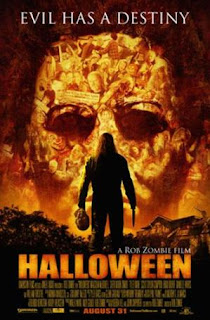 I am now arranging the line-up of every former techno-goth, noise rock, industrial horror-core kid in the world for the purposes of giving Rob Zombie a kick in the taint because this shit was wack, yo.

In Zombie's movie, we get 45 minutes of "prequel".  That's half of the fucking movie.  Half of the damn movie looking at an ugly child, that we already know is psychopathic, kill his pet and other small animals and take pictures of them, stalk silently, beat the boy from Spy Kids to death with a stick and then murder his step-father, sister and her fuck-toy. Considering their treatment of him, I'm not surprised. 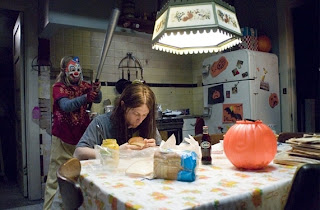 On top of that, there's Sheri Moon-Zombie, who sneers, strips and swears her fuckin' way through her part (see what I did there?) and is in desperate need of some damn FOOD and warm clothing, and to round out the nasty, there's Malcolm McDowell with the worst wig, ever. 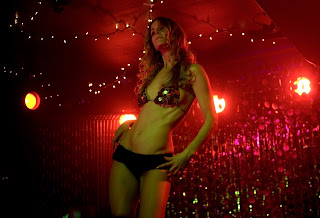 Sherri Moon-Zombie, queen of the anorexics.

Ugly child gets placed in the local Sanitarium with Dr. Loomis taking care of him and he becomes fixated with masks.  His mom is OK with visiting him until he kills a nurse and then she snaps like the twig she is and kills herself.  This is probably the wisest course of action anyone in this movie will ever take.

Upon attempting to migrate Michael to a maximum security location, he murders his guards, escapes, kills a trucker for his jumpsuit and goes home.  He locates the mask he killed his sister in, which had been hidden under the floorboards.

And now he goes on the hunt for his sister, Laurie Strode. 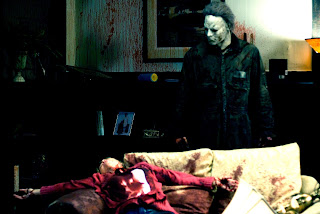 
And... ummm... yeah... the rest of the movie is standard, formulaic, 80's slasher schlock.  About the only thing cool about this movie is the sheer number of classic horror cameos Zombie managed to wrangle.  Leslie Easterbrook, Sybil Danning, Bill Moseley, Dee Wallace, Sid Haig.  Hell, the man managed to cast Mickey Dolenz for cryin' out loud.  Well, that and the letter jacket with Cherry Bomb stitched on it because Joan Jett is extra-cool and I love her.

The problem here isn't that the movie is filmed or edited badly.  The problem isn't the acting (except on the part of Sheri Moon-Zombie).  The problem isn't our ability to play Fleur de Lis on Sheri's ribs (although, she does not present a healthy body image and little girls everywhere should just ignore her presence entirely).  The problem isn't Tyler Mane (who is one of the coolest, and tallest, celebrities I have ever met).  The problem isn't even Brad Dourif and Malcolm McDowell gnawing on the scenery (which is just to be expected, really). 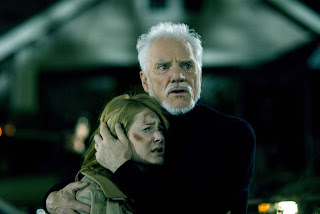 Anybody else get "creepy old man" vibe, here?


The problem is that Zombie tried to make Michael Myers human.

We need "I met him, fifteen years ago. I was told there was nothing left. No reason, no conscience, no understanding; even the most rudimentary sense of life or death, good or evil, right or wrong. I met this six-year-old child, with this blank, pale, emotionless face and, the blackest eyes... the *devil's* eyes. I spent eight years trying to reach him, and then another seven trying to keep him locked up because I realized what was living behind that boy's eyes was purely and simply... *evil*."

Sorry, Rob Zombie.  Hated it.  It's only purpose was to allow my friends and I a reason to disturb other movie-goers with our laughing.