This Gore-a-Thon thing is FUN!  So many people's different perspectives!  I hope you're having as much fun as I am.  Feel free to comment below and let us know how we're doing!

So, I have to give a disclaimer for my articles.  First, I'm not giving up Trope Wednesday for this.  I love imparting my vast, yet completely irrelevant in the real world, knowledge.

Second, I'm writing about remakes for two weeks.  Nothing but remakes.  I've said it before and I'll say it again.  A remake is not necessarily a bad thing.  In fact, we've been remaking movies since movies began.  It started with the transition from silent film to talkies and it has never stopped.  A lot of our classic films were remakes.  Dracula, Frankenstein.  Dr. Jekyll and Mr. Hyde, The Island of Dr. Moreau, Alfred Hitchcock's Rope.  To people that are gonna bitch that remakes are automatically going to suck, I want them to watch each and every movie that has been remade and judge them on their individual merits.  And then I want them to shut their whiny hate holes.

That said, the reviews I'm handling over the next two weeks are not all good so, ON WITH THE SHOW!!

Today, I'm going to talk about one of my FAVORITE remakes.   Thir13en Ghosts. 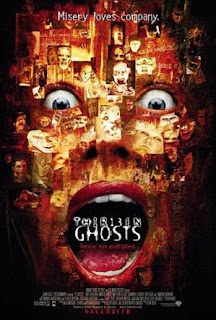 In 1999, Joel Silver, Robert Zemeckis and Gilbert Adler formed Dark Castle Entertainment which was meant to remake all of William Castle's films.  Apparently, they felt that this was silly and they only remade 2 of them.  I should write them a letter because I'm in the mood for a big budget remake of The Tingler.  And they should still TOTALLY put joy buzzers under the seats again.  Because it would make my butt terrified and happy.  And it would make my friend TerAnn scream like a little girl.  Which would make me giggle like a serial killer.

So, after the moderate success of House on Haunted Hill, Dark Castle went forward with Thir13en Ghosts.  It tells us the tale of Arthur Kriticos (Tony Shalhoub), a widower on the brink of financial ruin that cannot let go of his deceased wife (Of course it hasn't been that long, so give the guy a break, huh?) and his family, daughter Kathy (Shannon Elizabeth) and son Bobby (Alec Roberts). He gets a visit from a lawyer, Ben Moss (JR Bourne) who informs him that he has inherited the COOLEST mansion, ever!  It's made of glass and has ominous Latin phrases etched onto the panes.  Because Latin, in a horror movie, is always ominous.  And because nobody ever remembers this, we always end up with ominous Latin. 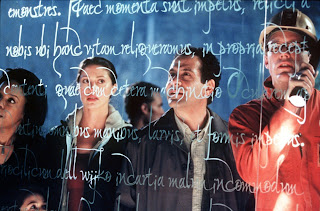 Oh, Shannon Elizabeth.  That face may be the only thing you ever got right.


Now, we know, because there is a prologue, that there's gonna be an issue, here because Uncle Cyrus (F. Murray Abraham) was a ghost hunter and Dennis, the crazy psychic (Matthew Lillard), meets the Kriticos family (and their, presumably unpaid, housekeeper, played HILARIOUSLY by Rah Digga) at the door posing as an electrician.  He warns them that the house was meant to trap ghosts and he wants to make sure that they get out of the house for their own safety.  We all know THAT wasn't gonna happen, now don't we?

For the next hour and a half, we have the Kriticos family getting separated and trying to get out of the house that they have unwittingly been locked into by the lawyer, who, like all lawyers, is kind of a dick.  Scratch that, DEFINITELY a dick.  As a shout out to Castle's original gimmick, they find "Ghost Goggles" that help them see and escape the ghosts that have been released (because of the fucking lawyer).  And they HAVE to escape them because pretty much ALL of them are angry and violent. 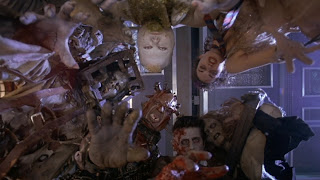 This will only end in tears... and intestine jump-ropes.


See, Uncle Cyrus was collecting them to complete The Black Zodiac, a collection of spirits meant to activate something called Basleus' Machine and open the Ocularus Infernum, an eye in Hell that allows the user to see the past, present and future in Heaven, Hell and Earth.  And, seriously, no one remembers this.  Because this isn't the awesome part of the movie.

Now, I know that this is the Gore-a-Thon but this movie doesn't have a high body count at all.  Most of the gore is in the ghosts themselves and they are some bloody, bloody bitches.  The Torso is literally just that.  The Angry Princess is a series of slashes and botched plastic surgery (who also provides boobs for the straight boys).  The Hammer has a sledgehammer grafted to his arm, The Jackal wears a cage over his head that it looks like he gnawed his way out of and The Juggernaut is a series of bullet holes. 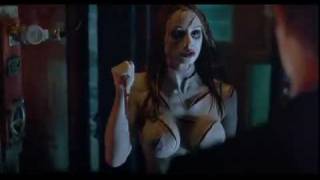 Here ya go, Straight boys.  Boobs.
I would put an adult content warning on here but you all should know better.

The BEST gory moment, though is the Lawyer.  He ends up being a sniveling bitch and gets cut in half, front and back, not top and bottom (get your minds out of the gutter) by a glass door.  I saw that in the theater and went ZOMGTHATWASTHEMOSTAWESOMESTDEATHINAHORRORMOVIEEVER!!  Because it was. 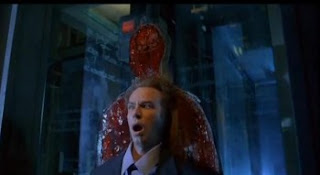 Outside of the gore, though, this is just brain candy but while it doesn't have the best plot and a lot of the movie is either "There's a ghost!  But you can't see it because you don't have the goggles!" or "I'm lost in the big glass house with the see-through walls!" (which does get questioned) there's a definite feeling that Steve Beck loved the original and just wanted to update the story for a modern audience.  He treated the original with respect and THAT is what I look for in a remake.  This movie has a soul to it and that's why I love it. You care for the characters (well, the human ones, anyway... and only most of them) and there's a good amount of tension that leads to some awesome scares.

I truly believe that this NEEDS to be in any good horror fan's collection.

I think I need a pair of those goggles, though.  Those are just stylish.
Posted by BobSmash at 9:16 AM