So... you guys are probably gonna hate me for this but I kind of don't care.  I can't help what I love and I love the 2005 version of House of Wax.

Because it's hilariously awful. 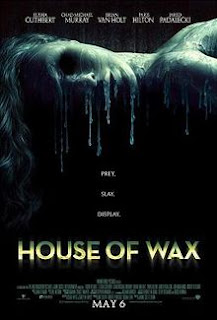 No, seriously.  If it weren't for the delicious idiocy displayed by the characters in this film, it would suck.  As it stands, though, I giggled my way through this like a toddler hopped up on pixy-stix and root beer.

So, the remake backstory goes like this.  In 1933, the last dramatic film made in two-color technicolor was Mystery of the Wax Museum, based on the unpublished short story/three-act play "The Wax Works" by Charles Spencer Belden and starring Fay Wray and Lionel Atwill.  People were kind of sick of the artificial colors that the two-color process displayed so this film kind of went away.  It was never reissued and for a long time it was considered a lost film.  (A new copy was discovered in 1970 and it's been recolored by Turner Entertainment and it is utterly alarming in its garishness.)  ANYhoo, the film was remade in 1953 in 3D, with the same plot but without the comic touches of the '33 film, and starring Vincent Price, Charles Bronson and Carolyn Jones.  The film is awesome but, considering it was a 3D film directed by Andre Toth, who was blind in one eye and, therefore, could not experience 3D, it fell a little flat in the gimmick department.

52 years later, Dark Castle Entertainment, who, after Thir13en Ghosts, had taken to remaking films other than William Castle's, gave us their own take on House of Wax.  It bears some, but not much, resemblance to either of the first two films and it's saving grace, as much as I hate to say it, is the fact that it features Paris Hilton who was probably hopped up on the goofballs throughout the entire shoot. 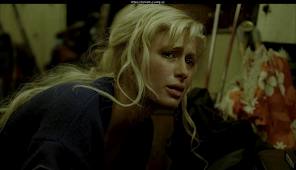 The film starts in 1974 with a woman making a wax mask; her child sitting quietly at the table with his Cheerios.  And then dad comes in with a screaming ball of angry child.  This child, as should happen with any child that is a danger to himself or others, is duct-taped to his high chair.  (I'M KIDDING!  Duct tape should never be used for infant control!  I hear it keeps diapers in place pretty well, though.)  After scratching his mother, she provides the pimp-slap. 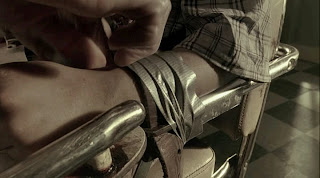 And the Parent of the Year award goes to...

Enter ubiquitous herd of oversexed alcoholic young adults on their way to a football game in Louisiana.  Because without them, there would be no story.  They set up camp one night and get mildly terrorized by a pickup truck.  The next day, Carly, our heroine, played by Elisha Cuthbert, trips and falls down a hill and lands almost face-first in a pile of dead deer.  Because eew.  She sees a human hand in the remains and the slack-jawed yokel who shows up to add to the pile shows her that it's just a mannequin.  In the midst of the gross-out moment, Carly's boyfriend, Wade (Jared Padalecki) discovers that his fan belt is busted.  Slack-jawed yokel offers them a ride into town to get a new one and freaks them out on the way so they get out and walk.

They arrive in Ambrose which is practically a ghost town and interrupt a funeral.  Bo, the local mechanic, offers to help them fix the fan belt after the service.  Because he's all helpful.  While waiting, Carly and Wade visit the local wax museum which is actually made entirely of wax.
After meeting up with Bo, who, oddly, keeps the correct sized fanbelts at his house, Wade gets his hamstrings slashed by a long-haired freak-nugget by the name of Vincent who operates at the same frequency as Leatherface and wears a mask made of wax.  Bo grabs Carly and super-glues her mouth shut while Vincent strips Wade, removes all of his facial hair, puts him in a contraption that pins his eyes open and showers him in hot wax because the people in Ambrose are all wax statues and I guess they needed a few more displays. 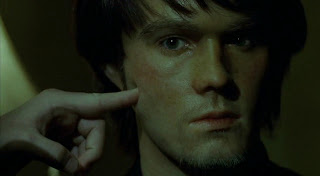 Aren't people normally told not to touch the exhibits?

And from there, we get to watch Carly's brother try to rescue her after she gets a finger cut off with a pair of tin-snips.  There's more Vincent action, there's Bo showing his true colors.  There's life-sized wax conjoined twin infants getting a hot knife separation.  There's melty staircases.  It's got everything!  Everything that no one needs, ever.

Seriously, kids, there is SO much wrong with this movie but you have to give props to any movie that allows me to cause the entire theater to bust out laughing with the words "That's hot." 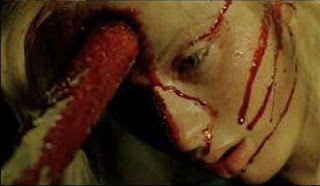 And this is where that happened.

Interesting newsy-notes about this one:

There was a $7 Million lawsuit against SFX expert David Fletcher and Wax Production because of a fire on the set that could have been avoided had they not kept timber props near an open flame and had a firefighter on set.  Because people tend to forget that wood and wax are all flammable and shit.

Also, the film was up for three Razzie awards that year with Paris Hilton winning the Worst Supporting Actress award.  She, unlike Halle Berry, did not show up to collect.

But, really, as compared to most slashers, the premise for this is OK.  It's not revenge or the hunt for a long pig sammich, it's just madness and I can deal with that.  This was a lot better than some of the other crap that came out around that time.  It's just not great.  Definitely a popcorn flick.  Turn off your brain, watch it for hilarious irony and forget the gaping plot holes.  Do not forget the gaping hole in Ms. Hilton's head.  'Cause that shit's funny.

This post brought to you by Glade 2in1 candles.
Posted by BobSmash at 12:45 PM