I'm trying to come up with the words for this but they're fighting me.  I'm pretty sure this review is going to leave me bruised.

I guess the best way to do this is to just jump right in. 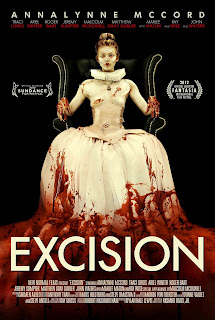 Pauline (AnnaLynne McCord) is a deeply disturbed teenager with a controlling and emotionally distant mother (Traci Lords), a milquetoast father (Roger Bart) and a little sister with cystic fibrosis (Ariel Winter) whom her parents dote on.  She fantasizes about becoming a doctor.  More accurately, she fantasizes about performing surgery on her classmates in a gruesome, over-the-top fashion which makes her the BEST surgical candidate EVER!  Only, not.

She's obsessed with blood, to the point of licking her own tampon  (FUCKING EEW!  EEW, EEW, EEEEEEEEEEEEW!).


She also experiences very extreme dreams about mutilating people in a chic and fashionable setting.  Because, apparently, she has never seen the inside of a hospital.  I'm fairly certain that scented candles and Elizabethan collars are not considered sterile. 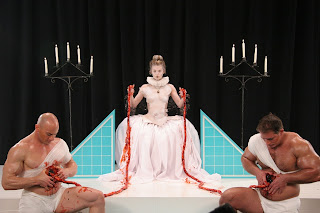 Seriously, I just posted this for the man-candy.


We get to watch as she destroys lives one by one and slips deeper into her delusion despite going to counseling as suggested by her mother (religious counseling, which she bristles at because she thinks the pastor is a hypocrite).  The boy who takes her virginity (which she arranged to occur while she's on her period)?  Check plus his red wings.  His girlfriend?  Check.  The girl next door?  Check.  Her own family?  Check, check, check.  Seriously, fuckin' checks everywhere.  BAM!  Parental disappointment.  BAM!  A face full of uterine lining!  BAM!  Chloroform!  BAM!  No med school for you!

Now, while the troubled teen is by no means a new concept in horror, I don't think we've ever gone so deeply into their psyche before and that includes May.  This kid has some SERIOUS delusions of grandeur borne from a subconscious need to make mommy love her again despite what she says.  She wants acceptance from her parents that she's not getting because her parents are as deeply flawed as she is.  She wants acceptance from her peers but she's fucking weird and her classmates can sense it.  The only character that isn't flawed emotionally is flawed physically which is what causes the emotional flaws to begin with.

Don't get me wrong.  This is a FANTASTIC movie with plenty of blacker-than-black humor and a bleak outlook but the characters... NONE OF THEM... are likeable in the least.  Everyone in this movie, except for the little sister, is an asshole.  The fact that mother and daughter only see each other eye-to-eye at the end is only indicative of the schism that they have created between them.

As a study of the modern, dysfunctional family, this movie is pure brilliance.  The dynamic between Pauline and her mother is vitriolic and painful to watch.  It's not abuse, per se, because the mother just wants a daughter that makes her look good (and who doesn't) but the fact that they are both portrayed as utterly selfish and unwilling to bend feels natural even as the actors are gnawing on the sets.

And the fact that we're not watching a descent into madness, but, rather, a FURTHER descent, makes this a fascinating watch.  Bitch was crazy to begin with.  We just get to watch the natural progression of it.


To top it all off, we have this dichotomy of an unattractive, quirky, utterly insane Pauline in "real life" as compared to the surgical, fashion-forward goddess Pauline of her dreams.  AnnaLynne McCord is a strong-jawed elfin beauty and the make-under is kind of amazing.

All in all, this movie has flaws.  It's slow-paced.  It's a little heavy-handed.  It features Traci Lords as a mother-figure (seriously?).  Those things aside, it's a great film and it's highly recommended.


Be prepared to be uncomfortable.
Posted by BobSmash at 12:49 PM