No, really.  Who the hell wants to sit on a frozen lake all day around a hole (that has drastically affected the stability of said ice) waiting for fish to take bait they wouldn't even take in the summer?  That's assuming that fish are still mobile under all that ice.  I'm pretty sure ice fishing is just an excuse for people to sit around not talking to one another (because it'll scare the fish).  Either that or it's a means of play-testing outdoor gear.

But, yeah.  That's what 2010's Hypothermia is all about.  Ice fishing.  And family togetherness.  And ice fishing. 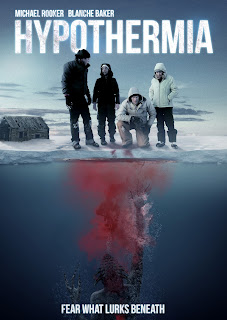 Ray Pelletier and his family go ice fishing once or twice a year at the same lake.  They have a cabin and everything.  Their son, David, and his girlfriend, Gina, are visiting after graduation and have yet to drop the bomb on Mom and Dad that they're joining the Peace Corps.  Dad's out on the ice for some reason when he sees a dead something or other on the other side of the lake.  He shrugs it off and takes one step and falls through the ice.

Because walking on ice is STUPID. 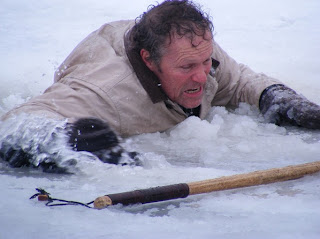 David goes looking for Ray after dinner and helps him out of the icy water and they manage to get him home without any additional damage.  Gosh, we're glad those kids are doctors, now.

So, they get on the ice for a rousing day of sitting on their asses with fishing lines and coffee when a gigantic douchebag and his son arrive with their humongous truck and their snowmobiles and their state-of-the-art ice fishing trailer.  They're extra-loud and annoying and this causes tension.  Somewhere along the line, they question why they haven't caught anything, yet.  They consider moving across the lake when something HUGE snags their lines.  Annoying dude, who later introduces himself as Stevie Cote (his son is Stevie Jr.), tries to help but the lines snap because he's a dumbass.

He is DETERMINED to catch this huge thing and has his son carve out a bigger hole.  He invites the Pelletiers over to hang out and have a few beers and while they're doing so, Jr. gets his arm sliced open by the huge thing in the lake.  It gets all infected and gross and while they consider taking him to the hospital, he manages to get himself eaten.  Stevie Sr. goes all Papa Bear and gets all determined to kill the creepy lake monster. 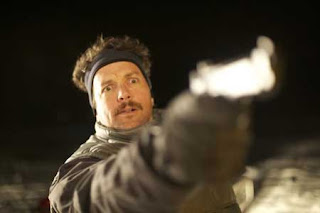 Because firearms are ALWAYS useful against lake monsters.

So, yeah.  It turns out that this thing is both bipedal and amphibious.  Because what use would a damn lake monster be if it couldn't get out of the water?

I need to slap a makeup artist, stat.

And the minute I saw the monster, I lost all fucking interest.

Sorry.  This one is a total barker.  The premise is kind of interesting but if you're gonna hand me an ice-fishing horror movie, I better be seeing some insane monster makeup.  You did not provide this to me, James Felix McKenney.  You cheated me as a horror fan and this makeup is un-fucking-forgiveable. You need to be dragged into the street and shot.

I would say that Michael Rooker was the saving grace of this film but he really wasn't. You're better than this, Mr. Rooker.  So much better.
The dialogue was cheesy, the acting was underwhelming, the plot was so-so, the make-up was terrible (thank you, Alaska Thunderfuck) and I actually had to shut it off, not caring whether these people lived or died.