Scootin' On The Carpet

And from yesterday's thrill ride into Awesometown, we come to a screeching halt in the middle of WhatTheFuckville with broken door locks and forgotten wallets.

We're gonna get murdered in the face. 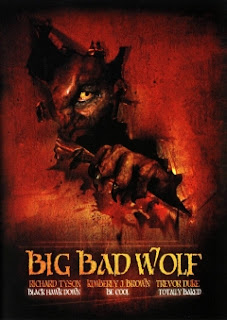 The movie starts with two men hunting in the jungles of Cameroon.  Oddly, Bebe Zahara Benet, winner of season one of RuPaul's Drag Race, did not come racing across the screen lip-synching to Diana Ross.  They get a call on the radio that includes the sounds of someone getting eaten.  Because this is Africa, they think nothing of it until they get attacked themselves.  And this is why hunting is bad.  Because there's a reason they call Nature a Mother.

Years later, we find Derek, a meek, scrawny milquetoast of a teenager pledging a fraternity, going up to his stepfather's cabin with 5 of his friends for some standard teenager fun.  They get lost and have to ask Clint Howard for directions.  Normally, this would be a bad thing but this time Clint is actually helpful. 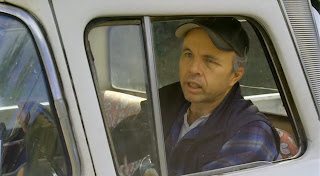 So, after spending hours trying to FIND the cabin, the shenanigans begin.  It's all fun and games.  One couple goes outside for a little romp in the ... woods?  There's, like, one fucking tree there.  Another couple gets down and kind of dirty seeing as how the girl isn't gonna give up the hymen until marriage and, apparently, doesn't swallow. 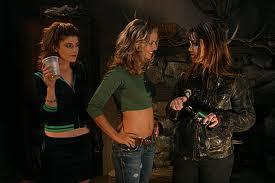 The two on the left?  Sexually generous.

That leaves grungy trailer park chick, Sam, and Derek.  Nothing happens there.  Snoozeville.  Not sure Derek has a penis at this point.

Anyway, the couple outside gets torn to shreds and then something begins terrorizing the kids indoors.  While most of the kids are cowering in the living room, Cherry Poppins in the bedroom, there, gets raped and murdered by, gosh, well, I'll be, a friggin' werewolf because her boyfriend told her to put some fuckin' clothes on. 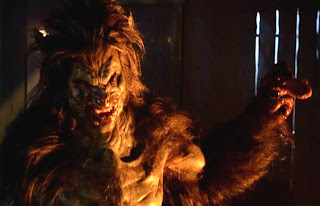 So, Sam and Derek get back to civilization and work out, somehow, that Derek's stepfather is a damn werewolf.  They go all Scooby-Doo, as idiotic horror movie characters are wont to do, and because they do, Derek's uncle gets slaughtered.  Kind of a revenge thing, I guess.  All the while, Derek, Sam and the step-dad are all being hounded by... the school news team?  Like they're going to be the ones to break a story about mysterious murders?  For real? 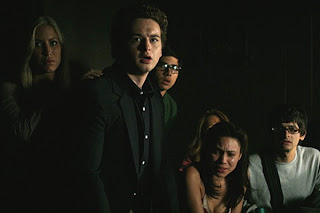 So, long story short, Sam gets abducted by step-dad and taken back to the cabin, Derek and the news team follow, the news team gets rendered into kibble, Derek and Sam attach silver knives to arrows, KNOWING that they ain't gonna fly that well, the werewolf is set on fire, the cabin is destroyed, Derek gets bit, step-dad passes on the curse, Sam gets all soppy and they drive off on a moped.

You people owe me.  You all had better be buyin' shit when I start offering it because if I don't shoot myself from the mental scarring all of these bad movies inflict, I'm still gonna have to pay a therapist and my paycheck just won't cover that right now.

This movie was AWFUL.  I don't care that it won an award in Houston, Texas.  It's TEXAS!  What the hell do they know besides big hair, Jeebus and lax gun control laws?  This was of even lower quality than your standard made-for-Syfy movie.  Sharktopus was better than this.

Seriously.  What the fuck was up with that makeup?  It's like someone sat on it before the latex cured completely and the $20 they reserved for make-up effects was almost gone because somebody needed a latte.  And the brown on brown on brown color scheme just made that face appear to have been molded from a weeks worth of dog shit.

This video?  Better than this movie.  NOT SAFE FOR WORK!

Just ignore this movie.  Pretend it never existed.  If I can save you from the suck then maybe my life has some meaning.
Posted by BobSmash at 11:02 AM