The Gang's All Here

Finally, on our tour of LGBT horror, we come to the indie-camp side of things.  We do so because it must be done.  Because the gays do love puttin' on a show and if we're gonna do it, we might as well do it big so the whole world can see it. 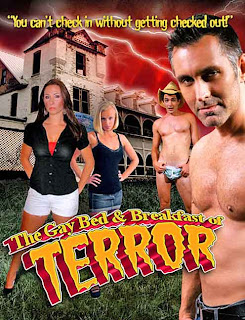 Our trip into Really Bad Stereotype Town starts with a Nancy Sinatra knockoff (that I can't really tell is a drag queen or not but I'm betting on tucking) singing about how we have to "Watch Out for the Straights".  After she's done freakin' me right the fuck out, our first line of dialogue is "Dammit!  Fucking cell phones."

Really, Sean Abley?  You couldn't have called this shit out, Mr. Producer Man?  LOVE YOU!  Mean it.

So, yeah.  We then get introduced to our cast of stereotypes all on their way to the Blue Party.  The leather sash-queen (whose name is actually Dom...) and his boy/surreptitious drag queen, the sugar daddy and HIS boy, the self-loathing Log Cabin Republicans and their sex-starved ALA (alternative lifestyle assistant... I'm not a fan of the term "fag hag"), the pretty lesbians and the crunchy granola lesbians complete with folk-singing action.  They ALL get greeted, separately, mind you, with the same overdone welcome speech by the owner of the Sahara Salvation Resort, Helen and her freaky Igorina-like daughter, Luella.

Helen, of course, has a hyper-religious plot to get Luella a husband by way of converting a gay dude.  Because bitch is psycho-nutty.  For realsies. She serves mincemeat muffins.  Mincemeat muffins that contain actual meat.  The source of the meat is unknown but pretty fuckin' obvious.  There's an earring involved. 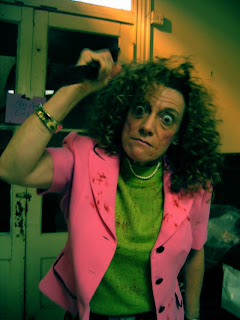 Oooooooh, girl.  You got She-Mail.


You know, I'm not sure that I'm going to do this movie justice with a description so I'm gonna show you some pretty pictures for a few... 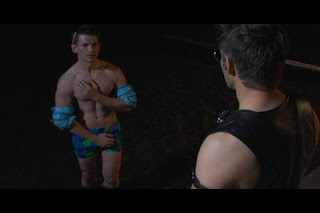 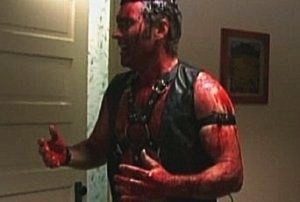 A little club soda will get that right out.


How did this guy get away?  The dude he was HAVING SEX WITH (not his partner, by the way) just got massacred WHILE HIS DICK WAS IN THERE, a la Friday the 13th. 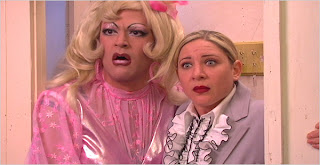 What the hell did I just watch?

No, really!  This movie has it all!  Sex!  Violence!  Occasional peen!  Gallons of fake blood!  A Fred Phelps analogue!  Overgrown flipper-babies!  Bobaloo from The Great Food Truck Race as a nun!  Rabbit fur, kitten head purse!  From Tuscany!

And it's BAD!  But hilariously so.  The acting is kind of horrendous, no gay people dress like that, and it's a little long-winded and convoluted, as if the editor just kind of switched scenes around and didn't tell anybody.  It's all kinds of "but black people call each other the "N-word" and, god dammit you can't help but to watch it all the way through just to make sure you didn't miss any of the freaky.

And freaky it is.

What the hell is up with 30 minutes of the film being wasted with a girl carrying around an ice bucket?  The bastard child of a hundred Republican National Convention delegates? Did you guys SERIOUSLY refer to a character as "Darren Stevens"?

This is the kind of craziness that people spread like a virus because OMGYOUHAVETOSEETHISBECAUSEIT'SHORRIBLE!  It's the cinematic equivalent of "Does this taste bad to you?"

Email ThisBlogThis!Share to TwitterShare to FacebookShare to Pinterest
Labels: awful, hilarious, horror, LGBT, LGBT Horror Week, review, snark, The Gay Bed and Breakfast of Terror, what did I watch again?