What Am I Doing In This Basket?

Yes, I had to do it.  I'm sure you all remember that I mentioned Hellbent a while back.  Well, now I'm actually going to talk about it.  Like a gossipy drag queen, I must expose the shame. 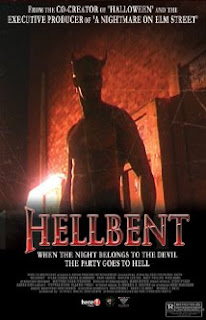 Our tale starts with one of the most iconic of horror movie images, the young couple making out in the car.  I'm not sure if there were "woods" or not because they're in L.A. but it's nice to imagine things.  And, then, by sheer serendipity, they get attacked by a muscle-y dude in a devil mask who beheads them both with a sickle. 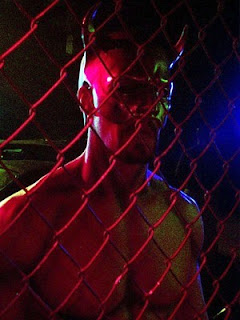 Who, apparently, always walks around with mood lighting.


Oh, and did I mention it was the day before Halloween?  Because that's totally a factor, here.

On Halloween proper, our protagonist, Eddie, a police technician, is handing out flyers detailing the murders for everyone's safety.  He's not actually a policeman but he wears his father's old uniform as a costume.  He gets to flirt with Jake, the motorcycle-ridin' tough guy.  'Cause that's new or anything.

Later, Eddie meets with his roommates, Chaz, Tobey and Joey, because living in L.A. without at least one roomie sleeping in the closet is unheard of, and they decide to go traipsing about the woods to see the murder scene.  Because the California sun has baked their skinny-ass brains into oatmeal cookies.  While there, they actually see the devil-face dude and they think he's cruising them.  Because they're gay and live in Hollywood and are, therefore more vain that the wicked queen in Snow White. 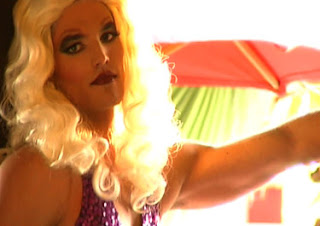 There's some kind of carnival that the friends all go to and promptly leave when Eddie sees Jake go into a bar called The Meat Locker.  Ooooooh.  Original.  Can somebody tell me what the gay community's obsession with puns is all about?  This is why we can't have nice things.

So, anyway, Eddie goes after Jake, Joey is all obsessed with Jared but gets shot down and goes to cry in the bathroom.  Chaz consoles him but then leaves him alone to sob into the toilet paper.  Jared catches up with Joey and makes everything all better and then Joey gets hacked at.  Woooooo. 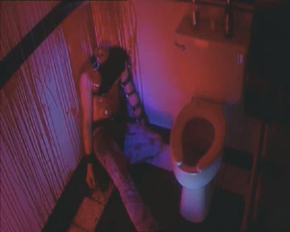 That's the BEST place to be found headless.

Chaz decides to go to another club where the killer, who, like all movie serial killers, can teleport, guts and beheads him on the dance floor where no one notices this happening because to the filmmaker gay guys are all fucking dumb and blind.  Excuse me while I seethe for a minute.

Anyway, Tobey, who's in really bad drag, is pissed that no one's hitting on him so he takes things into his own hands and tries to hit on the killer who, of course, collects his fucking head. 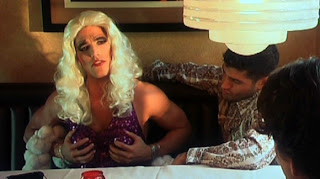 So, Eddie and Jake get back to the Meat Locker, since they'd disappeared to go do other stuff, and find it closed because of the discovery of the body.  Joey goes to get his bike and Eddie follows him but finds that Jake has already circled around.  Of course, Eddie gets attacked by the devil-dude and manages to get himself locked in to where the killer can't quite reach him but he does manage to get his eye scratched by the killer's sickle.  This SHOULD have warranted a trip to the ER but Eddie's eye is totally fake.

So, yeah.  Because they're both traumatized, they go back to Eddie's place to make with the horizontal mambo but Jake won't let Eddie kiss him.  Can we say "self-loathing gay"?  Jake finds Tobey's license with blood on it but he doesn't know what that means because, again, according to the film maker, gays are stupid.  Grrrrrrrrrrrrrrr.
So, because every sane person allows themselves to be handcuffed on the first date, Eddie allows Jake to handcuff him to the bed on the first date.  Jake gets stabbed while looking for condoms which is pretty much the only smart thing anyone in this movie has done.

And then?  HE STRIKES!  The killer has, through the auspices of Tobey's driver's license, found out where Eddie lives and as he's coming for Eddie, prone and helpless, Jake stabs him with a kitchen knife.  Eddie manages to get a hand free and thus begins the claustrophobic apartment chase. 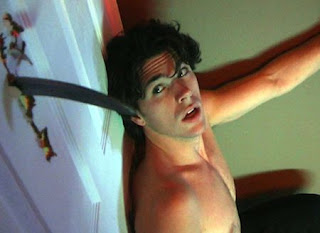 Eddie pulls out his dad's gun but in the process of loading, Eddie gets attacked and has his fake eye literally sucked out of his head and gets knocked over the fire escape railing.  While the killer is going after Jake again, Eddie fires but because he has no depth perception he hits Jake first and then lands a headshot.  It's only after this that Jake allows Eddie to kiss him.

Yes, this barker was left open for a sequel.

You know, I'm all about supporting my community and that means their artistic endeavors as well but damn.  There comes a point where "If you build it, the gays will show up and redecorate the place" wears right the fuck off.  There's a serious problem in Hollywood and it's this:
Gay people are people.  Yes, we run with our own crowd but that's a safety issue because the world outside does not treat us like we're people.  That's why it's only recently where gay people stopped being treated as fey comic relief and were introduced as supporting characters in straight films.  Now, that being said, yes, there will be movies that portray us within our protective bubble and this is one of them.  The problem is that THIS film chose to show us at our very worst.  We're portrayed as self-centered jerks who don't pay attention to the world around us.  The dance floor scene is the epitome of this.  A person is violently attacked and the gays directly on the scene do nothing.  They're in their own little world, not caring about anyone but themselves and the good time they're having.  It's a HUGE stereotype and it pisses me off.

For an indie film, the production quality is actually not bad and the music by Pansy Division, Nick Name and Three-Dollar Bill is good but I have to give this a thumbs down for content.

I'm not going to say for you to skip it, though, because I need people to see it and then hunt down Paul Etheridge-Ouzts and inflict the death of a thousand cuts on him for being an ass.
Posted by BobSmash at 11:18 AM