I'm gonna apologize ahead of time, kids, because there are NO good pictures for this movie except the poster.

You may thank me for saving your eyesight later.

So.  Anyway.  Full Moon Entertainment has put out a LOT of hideous crap over the years and Unlucky Charms is just the latest in their badly-scripted, worse-acted line of Z-Grade uber-trash. 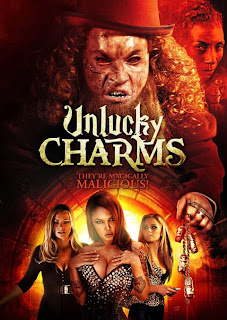 So, yeah.  4 Irish bugaboos, Banshee, Phouka, Bloody Bones and Far Darrig (It's supposed to be FIR Darrig and none of them are supposed to be proper names but what do you expect from a script that's probably 90 percent improv) are after 4 ancient Lucky Charms that are part of some ancient magic doohickey because their power is being wasted on selfish crap.  They're the GOOD guys, even though Bloody Bones is a total perv and the others are being forced to kill people.

Enter our victims.  5 beautiful women, none of them smaller than a B-cup (because, in direct contrast with my post last week about the Final Girl, this movie IS utterly misogynistic), who are on an America's Next Top Model-like reality show competing to be the spokesmodel for Dee Dee DeVille who proves that "black don't crack" is entirely incorrect.  She's the one with the charms and she's using them to stay young by sucking the souls out of the contestants and who's evil can only get better.  No.  It can really only get better because she's the lamest excuse for a villain, ever.  I was hoping she was making a model-skin coat but no such fucking luck.

Also included are the super-gay Pirl, who does nothing but bitch and complain through the whole movie and a skeevy producer whose name I can't even remember who specifically set up his bedroom in the house to have no cameras so that he can fuck around with at least one of the contestants

Only two of the girls die.  (The body count in this one is intensely disappointing.)  The third would-be victim is utterly pure and innocent (shock) and is immune to the charm's powers.  The remaining two (whom you'd THINK Cruella would try and go after when this failed) are the ultra-bitch with the sick brother which is why she needs the money and the funniest character, the vaguely Asian girl played by Mitsuimi Max who, despite her obvious plastic surgery, looks awesome.  Who knew tight-lacing and DDD sweater-puppies would look good on an Asian girl.  She's a little hilarious, though, and should be the next Carmen Electra.  She'd certainly do a better job at it than the current Carmen Electra.

Suffice it to say that this movie does its job.  And that job is to kill time during a bout of insomnia and slow your brain down enough to sleep.  It's bland with tons of T&A but there's not a lot of gore which is weird because we expect that from Full Moon.  Step up the game, kids.  We want awesome shit like Subspecies and Puppet Master back.

Gingerdead Man can go the hell away, by the way.  Just sayin'.
Posted by BobSmash at 2:59 PM