Today, children, we delve into yet another highly praised, celebrated, critically-acclaimed pile of shit. 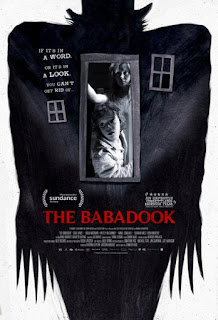 The Babadook.  No, really, that's what it's called.  The Babadook.  It's like the writer just kind of hung around heroin addicts and thought that overdose babbling was the coolest sounding thing, ever.

So, anyway, the story starts out as all good Disney movies do, with the death of a parent.  Wait, did I say Disney?  This isn't Disney.  Why did I say Disney?  Oh... because it's true.  ANYWAY, our lead, Amelia (Essie Davis) and Sam (Noah Wiseman) are spending the next two hours reeling over losing Oskar in the automobile accident that killed him on Amelia's drive to the fucking delivery room.  So, Sam is mourning someone he never knew except as the occasional dick poke during his formative months.  I get why Amelia's sad about it but damn.  Seriously?

During the course of all of this grief, Amelia (who is not the sanest crayon in the box to begin with) comes across a pop-up book that she was not previously aware of and reads it to Sam as a bedtime story.  Because this is a horror movie, the book really isn't something that should be read to children.  In this book, the creature described, the titular Babadook, is one that will haunt the fuck out of you for just knowing about it.  Like Jesus.  Or Rush Limbaugh.

And so the haunting begins.  And it's less "haunting" than it's "Shut the fuck up, Sam, before I rip that whiny tongue of yours out and feed it to you because you are the worst."  'Cause, y'see, kids, this movie isn't really about the haunting.  It's about a woman who has never gotten over the death of her husband because she's got a constant, loud, disobedient reminder living in her child's room.  All touching his father's old stuff and making deadly projectiles to protect himself from the monster in the closet and shit.

Now, I say this is a pile of shit because I don't consider it a horror movie.  It's a family drama about the madness of grief and when taken in that context, it's actually quite good.  It's just all of the stupid shit we have to sift through to GET to that little nugget that I don't care for.

When taken as a horror movie, though, it falls flat.  It's a slow-burn, first off, and while I LIKE a slow-burn from time to time, I just wasn't feeling it, here.  I didn't need 2 hours of screaming that only dogs should be able to hear over something that got less screen-time than the shark in Jaws.  I wanted to see more of Amelia going through her mental illness paces, since that's the direction the film was heading and I didn't see that.  It was too literal in some spots and not literal enough in others.

This is another of those "Your Mileage May Vary" numbers.  I, personally, didn't care for it but, then again, consider the source.  I'm much more a "slasher" guy than an "haunter" guy so take this with a grain of salt.

Email ThisBlogThis!Share to TwitterShare to FacebookShare to Pinterest
Labels: horror, meh, review, snark, The Babadook, your mileage may vary