Are you new here? 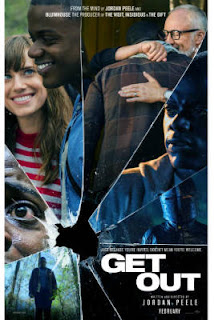 All strapped into your comfy chairs?  Are you ready for this?

So, I'm sure you've heard all about Jordan Peele's horrific vision of the face of modern racism.  Even if you only saw the commercials, you got the gist of what was happening.  Interracial couple goes home to get the black boyfriend introduced to the parents.  You expect the sobbing and the wailing and the gnashing of teeth all Guess who's Coming to Dinner style, right?  The girlfriend being super-positive and "They're gonna love you!" while our guy, played with a sassy smirk throughout the whole film by Daniel Kaluuya, is all "But... I'm black.  You told them, right?  They know what's coming, right?"


They DO hit a deer and get racially profiled on the way there and that freaks our hero out, but otherwise the trip to the house is uneventful.

I'm going to do my best to not spoil this but it gets SUPER-weird from here on out.

So, Dad is a neurosurgeon and Mom is a licensed hypnotherapist who REALLY likes her tea.  She has that same cup in her hand throughout the whole movie, kinda like Sharon Stone in Catwoman but without the booze and smug satisfaction of doing a film for the sole purpose of buying a pool.  Sharon was the best part of that movie (which I love for its utter horribleness).  I didn't realize you could actually get paid in highballs.  BOOZE, kids!  The great motivator.


There's a party but that's almost not the important part.  The important part is MOM IS A GODDAMNED HYPNOTIST!  And she's SHADY about it.  Like, doing it without you realizing it until it's too late.  But at least he can quit smoking, so, bonus, I guess.

Oh, and did I mention the Stepford servants?  The ones they say are just like family?  Yeah... hold that thought.  You'll need it at the end.


There's a twist.  It's a BIG twist.  A twist so audacious, you don't even see it coming until it fucking steamrolls you into a popcorn-filled pancake.  A twist that, had it been used in ANY other manner, would have earned Jordan Peele every Razzie in existence.

First of all, let me say this.  Holy.  Fuck.  This is fucking AMAZING!


This, kids, in the guise of a horror film with some deep comedic roots that knows when to dial back the silly, is "cultural appropriation" writ large and in fucking charge.  The line is obliterated at "appropriation" and sends you screaming straight into cultural PILLAGING.  When you watch the trailers, you think this is all about some kinda slavery thing or some way of forcing the black man into assimilating into white society but it's so much fucking worse than that.

See, these people LIKE African-Americans.  Like, a LOT.  They want to know and understand their culture.  They think that hanging out with "the coloreds" is cool and they're INCREDIBLY impressed with their physical superiority.

Wait, whut?  They did this because white men can't jump and black don't crack?  THAT'S what they got out of repeated viewings of Roots?  Fuck, Peele, you went in DEEP.

ANYWAY!  There are times, watching this film, that made it hard to remember I was watching a horror movie.  That's good.  I complain about being lulled into a false sense of security but it obviously works or filmmakers wouldn't keep doing it.  In this case, you almost expect this to go off-track into a Key and Peele sketch but it doesn't.  Those little detours are what make the actual horror pieces slap you right in the goddamn nuts and say "PAY ATTENTION!"

And pay attention you fucking should because this is, to date, the most culturally significant horror film, in regards to race relations, to come along since Night of the Living Dead.  Socially CONSCIOUS horror is a fantastic thing and this one gets the job DONE.

Email ThisBlogThis!Share to TwitterShare to FacebookShare to Pinterest
Labels: culturally significant, excellent, Get Out, horror, review, snark, watch it NOW