What Did I Fucking Tell You About Children?

Oh, your stepson is the Antichrist.  That's fun to know.  I'll, aaaahhhh... I'll be over here.  Not pointedly laughing at the horrible birthday clown who IS NOW ON FIRE, WHAT THE SHIT, MAN?!?" 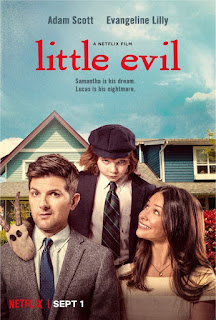 So, Adam Scott is playing Gary.  New stepdad to Lucas, the titular Little Evil, and new husband to Samantha (Evangeline Lilly) who is adorable and lonely and clueless.  She's really not a helicopter mom but she watches out for her boy.  Her boy who was conceived during a cult ritual and she fucking knew it, so her son being the actual Antichrist really shouldn't have come as such a shock to her but, y'know... here we are.

Gary, of course, being the stepdad, just wants to be a good guy.  Soapbox derby cars, ice cream, the works.  The kid, on the other hand, has some fuckin' issues.  The most pressing, of course, being that he is literally the spawn of Satan, begat via creepy reverend (Clancy Brown) who moves into town to harvest the goddamn crop.  Gary, meanwhile, is showing this dude property, none the wiser.  He's ALSO getting calls from the wedding videographer who, while taping the ACTUAL FUCKING TORNADO THAT DESTROYED THE WEDDING GROUNDS, noticed that Lucas was untouched by winds that have been known to pick up and toss around cows and trains.

So, what does Lucas do to Gary the first day he drives him to school?  Manages to get himself detention and get Gary blamed for it.  Gary, who has to attend mandatory therapy and now has a Child Protective Services agent visiting (played delightfully by Sally Field).  His co-worker, a male-identifying individual by the name of Al (Bridget Everett), is also part of the the group, and they form a bro-bond over the whole thing.  A bond that is as tight as Octomom's pelvic floor.  At least at first.


Suffice it to say that Lucas is so upset at having a new daddy that he buries him alive.  Literally.  Called Samantha from a box under the swingset.  She DUG HIM OUT.  Which upsets Gary which upsets Samantha who puts Lucas in a time-out (seriously?) and proceeds to not believe Gary which almost gets divorce papers signed but flowers and a trip to the water park for Gary and Lucas are all it takes for happy families, I guess.

If this SOUNDS like a set-up, that's because it is.  What do we do with the Antichrist when we find him, kids?  That's RIGHT!  We try to kill him.  And that's when the fun REALLY starts.

No, for real, kids, other than that whitewashed sack of weeaboo fangasm, Death Note (which I'm currently in the middle of and thoroughly hating), Netflix is putting out some good material and, while this is not really Oscar-worthy (and come on, how much do I watch that is), it's actually pretty good.  It funny, it makes good use of its people, it's heartwarming in that "You can be whatever you want to be and I don't want to kill you, anymore" kinda way.  It's actually a decent "family" horror-comedy.