And a Hearty "Fuck You" To You, Too, Sir

After 6 years of Development Hell, Relativity Media and Marcus Nispel, the director behind the Friday the 13th and The Texas Chainsaw Massacre remakes seem poised to FINALLY bring the Devil's Due cult-classic comic Hack/Slash to life on the big screen. 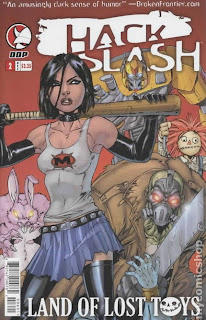 Hack/Slash is, quite honestly, one of the most original and refreshing stories to grace the pages of comic-dom and I highly recommend it.  It follows the story of Cassie Hack, a goth-girl who happens to be the daughter of "The Lunch Lady", a "slasher" (a supernatural serial killer along the lines of Michael Myers or Jason Voorhees) who took revenge on those who bullied her daughter by serving them in school lunches and was subsequently killed by Cassie herself.  She now spends her time hunting down these villains and is joined by her large, muscle-y and slightly deformed side-kick, Vlad, best known for being mistaken for a slasher himself and wearing a gas mask to hide his slightly green face

Currently, there's no set script but the rumor is that the Stephen Susco draft is still on the playing field.

There's a few problems, though.

I'm about to go all nerd-rage on this one.

Did they READ the comic?  Cassie Hack is at the VERY least bisexual (and, frankly, the LGBT community needs all the role-models we can get) and her relationship with Vlad, while touching and very close, is definitely more brother and sister (even though Vlad does get jealous when she gets attention and he doesn't).  There is absolutely no need to force that kind of relationship on them and the best you can hope for by doing so is an army of angry fanboys waving torches and pitchforks who are in desperate need of a big-screen lesbian romp and potential goth-girl boobies.

Beyond that, a PG-13 rating is the kiss of death for horror movies.  We want full-on horror, not teeny-bopper crap.  The comics themselves are delightfully gory and snarky and they deserve the right treatment.  And, seriously?  Teens want something they have to sneak out and see.

Do NOT take the Twilight route on this one, Mr. Nispel.  It will not end well.
Posted by BobSmash at 6:04 PM