On Widowers and Poor Dating Habits

Today, we step overseas for a trip into J-Horror-Land.

Japanese horror has a certain richness to it that American horror does not because we Americans are not a subtle people.  I don't have a problem with that, per se, but sometimes I like to watch something that makes me think.  The Texas Chainsaw Massacre is not one of the great philosophical works of our time.

This brings me to today's review:  Audition.  Or, in Japanese, Ôdishon. 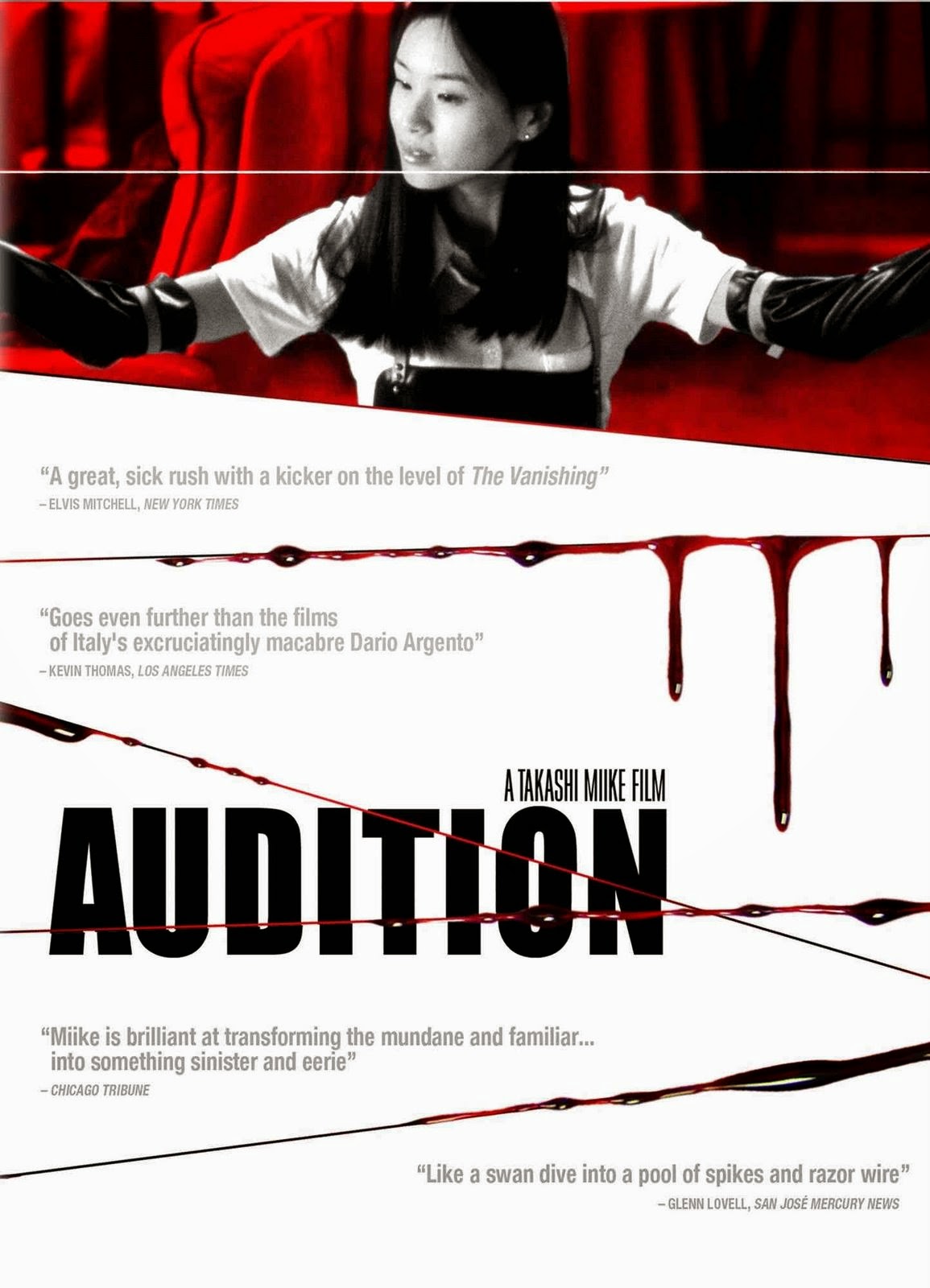 Takashe Miike is a sick motherfucker.  If you watched the Masters of Horror episode "Imprint", you know this.  This was the one episode of that series that did not actually get aired on Showtime because it was TOO dark.  In Audition, he gives us an extreme look at what is known in Anime circles as "yandere" (pronounced Yan-dé-ré), a word best used to describe Alex Forrest from Fatal Attraction.  (Yandere is a pormanteau of the Japanese words "yanderu", meaning mental or emotional illness and "deredere" meaning to show affection. )  Yandere characters are, often times, INTENSELY deranged and use extreme violence and brutality to express their emotions.  And in Audition, you get to watch it coming.

I'm going to warn you, now.  Audition is not only a slow burn but one that you really have to pay attention to.  NOT a movie for the ADHD crowd unless they're up to date on their Ritalin.

Enter Asami Yamazaki, a former ballerina and source of enchanting emotional depth to Shigeharu who starts a whole bunch of weirdness when her resumé turns out to be at least partially faked but that's OK because he doesn't need to actually hire her.  He just wants her to take his dead wife's place.

So, anyway, we get additional glimpses into Asami's life.  Or what might loosely be called a life by anyone who was even remotely sane.  Woman lives with a telephone and a sack.  She has little other furnishings and she spends 4 days literally sitting by the phone waiting for it to ring.  When it does, the sack gets spooked.

Yes, that's right kids, the sack does not contain furniture, it contains her pet.

So, yeah.  They get together at a motel and do the horizontal nasty even though she's all "I was abused as a kid" and Shigeharu goes all "I love you, you pretty, damaged flower, I will fix you because I am a Japanese man and you are a woman who cannot fend for herself."

Do you get where this is going, yet?

So, yeah.  Back to that resumé thing.  He finally gets a couple of hits.  The first being a ballet instructor with two prosthetic legs who shares the name of Asami's abuser and the second being a bar where she worked that was closed down after the dismemberment of the owner, the crime scene of which they found 3 extra fingers, an extra ear and an extra tongue.  GAH!

And here's where Asami starts getting REALLY weird.  Bitch breaks into Shigeharu's house and finds the picture of his dead wife so she poisons his liquor decanter and hides.  Then, in a flashback, we find out that her pet is a person (that wasn't news, really, was it?) that is missing an ear, his tongue, both feet, and three of his fingers.  When he begs for food, Asami vomits into a bowl for him and he dives in with no qualms whatsoever.

And this is where, yet again, I wonder who the hell is supplying the psychopaths with injectables because SOMEHOW Asami got her hands on a paralytic that keeps the nerves alert.

I will not go into detail but Asami is just not a nice person and Shigeharu learns his lesson about lying to get a date.  And, you almost feel bad for Shigeharu but then you realize that, instead of actually going out and being sociable, he treated dating like a business deal and that was his downfall.

One of the things that I liked about this movie is that even though we were privy to the actual torture, we were more focused on Asami's enjoyment of it.  People call this one of the most disturbing movies of all time and, frankly, they're right.  This movie puts bunny boiling to shame and gives us the hobbling that Misery should have.

I love this movie.  I hope it never gets remade because it is a neo-classic and it shouldn't be touched.  It should probably be kept in a locked cabinet out of reach of children, pets and the elderly, but it should never be remade.

Plus, it reminds me why I don't date women.  A dude'll punch you but a lady will cut off your junk and serve it to you in the form of an elaborately arranged plate of thinly sliced sushi with a delicate white wine on the side.  And you'll LIKE IT.
Posted by BobSmash at 12:55 PM