You know, when we think of horror, we often forget that man's inhumanity to man is the worst horror of all.

It always amazes me what kind of crazy, hurtful things people will do to each other and that brings us to today's review. 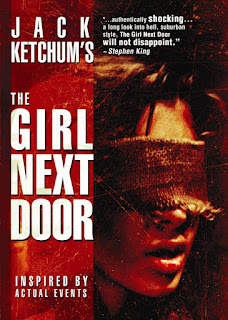 Jack Ketchum is probably one of the best writers out there and, in my opinion, an unsung hero of horror, because he takes us places that we really don't want to go.  He doesn't rely on the supernatural or otherworldly monsters or masked serial killers.  His stories are, by and large, about the depths to which humanity can sink.

The Girl Next Door is probably his best known work beyond Off-Season and Offspring, and to tell you the absolute truth, this one made my skin crawl.

The thing here is that while a lot of movies claim to be based on a true story, which we know is utter and complete bullshit, this one actually was.  Sylvia Likens was a girl in Indiana that was tortured to death by her foster mother, and other neighborhood children.  And that is the precise premise of The Girl Next Door.


The most disturbing thing about this movie is that, other than changing the relationship between Meg Laughlin (the titular Girl Next Door) and Ruth Chandler to one of niece and aunt, respectively, and altering the reason Meg and her sister end up with Ruth, the story seems like an almost 100% accurate portrayal of what Gertrude Baniszewski subjected Sylvia Likens to in 1965, up to and including carving insults into her stomach with a heated nail.

Around this horrendous story, but not in real life, The Girl Next Door gives us just the tiniest bit of hope as one of the boys in the neighborhood has been in love with Meg from the first time he laid eyes on her.  Unfortunately, though, he's forced by Ruth to participate in this girl's torture and, at times, feels OK with what he and the other boys are doing because Ruth makes them think that it IS OK since an adult has told them so.  (Just FYI, kids?  If an adult tells you that it's OK to put a Coke™ bottle somewhere it does not belong on, in or around another human being, that adult is lying to you and is probably a member of the clergy.)  He redeems himself at the end by attempting to release Meg, although he ultimately fails.

Never let anyone tell you that a downer ending is a bad thing.  Often times, it's the best ending to have.  Nobody likes pablum that has been sanitized for your protection.

Ketchum, by the way, if you've read any of his other works or saw The Woman, seems like a sexist bastard but I don't think he is.  Even though women in his books and/or films are often the subject of abuse, he also uses women as both empowered characters who win the day and as horrific villains.  In terms of his writing, I don't think he's one of the best technically but he DOES know where to hit and make it hurt.  I say give him a read.

Just as an FYI, the story of Sylvia Likens is also told in An American Crime starring Ellen Page (for whom I would gladly attend the opening of an envelope) and Catherine Keener.
Posted by BobSmash at 12:23 PM