Trick'r'Treat is the bestest, most funnest, most awesome-ist Halloween movie EVER MADE! 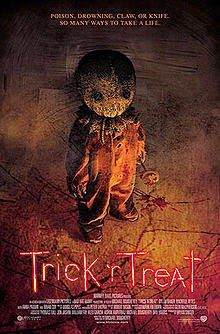 I was going to wait until Halloween to do this but I figure this will give you guys time to get to Best Buy and get yourself a copy because you all seriously need to see this movie, even if you're not a horror fan, because this movie is about Halloween (which we all know is my favorite holiday) and it's customs and traditions.  Santa can eat it (and probably did, the fat bastard).  The Easter Bunny?  Who wants hasenpheffer?  St. Valentine?  Fuck him in the ear.  Give me a Jack O'Lantern, any day.

As I said in the Creepshow post, this is an anthology movie but it almost doesn't play like one.  In most anthologies, the stories aren't related to one another.  There may be a wrap-around that connects them through the tellers of the tales, but the stories are generally very different.  In Trick'r'Treat,  director Michael Dougherty weaves the stories and characters in and out of one another so deftly and so smoothly that, even though there are four (almost 5) different plots, the movie is seamless.

The movie opens by explaining to us that there are rules to Halloween that must be obeyed or horrific things happen and the rules are the impetus for the plot.  Things like letting the Jack O'Lantern burn out by itself and never smashing one, always having candy for trick or treaters (otherwise, you're open for a nasty trick), dressing in costume to ward off true evil and always checking your candy.  Throughout the movie, we meet those who follow the rules and those who disobey and the figure behind it all is little Sam, a boy in footie-jammies and a cute little scarecrow mask who is DEFINITELY more than he seems and he's got some uses for candy that are simply delicious. 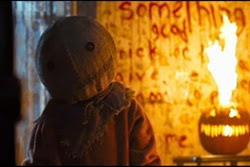 The stories themselves are almost innocent in terms of horror movie standards but the have that evil kick that makes them all kinds of twisted fun.  From the school principal (Dylan Baker) with more than one dirty little secret, to the cranky old man next door (Bryan Cox) who is more likely to send you off his property with a butt full of rock salt and buckshot than with candy, to the co-ed (Anna Paquin) who is out to get rid of her virginity and to the kids out to play tricks and tell urban legends, all of the stories are delightfully creepy and just add to the macabre charm of Halloween.  Besides?  Who doesn't love it when a little kid yells out things like "CHARLIE BROWN IS AN ASSHOLE!"?

As I said earlier, the characters interact with each other through the whole movie and part of the fun is picking them out in each of the other stories.  It makes the movie a game which makes it even MORE fun. 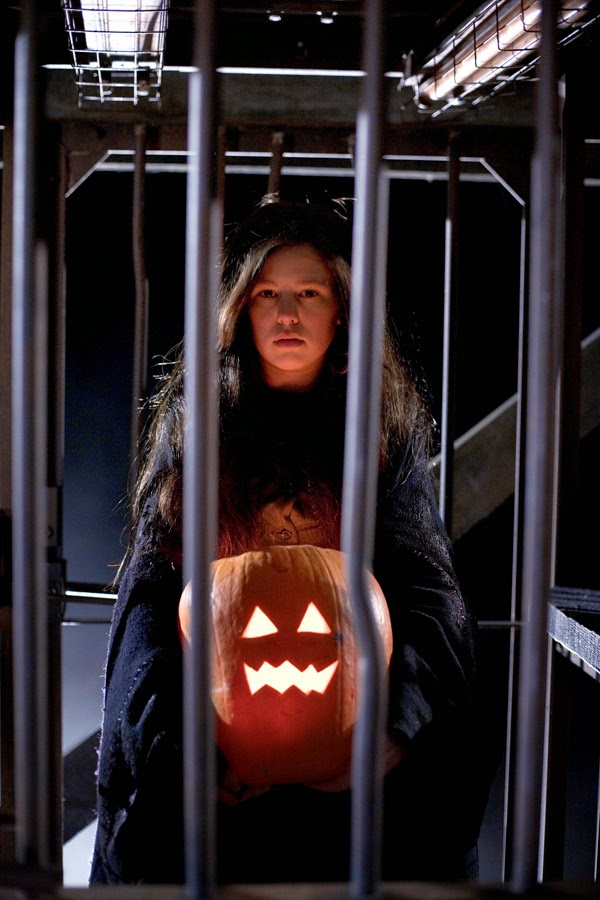 I have nothing bad to say about this movie.  Nothing at all.  Even with an R rating, I would suggest this movie for the 13 and up crowd.  It's not overly scary and not overly gory.  In fact, as Goldilocks would say, it's just right. This has been said before by many, many people but this movie should have gotten a wide theater release but it didn't.  Warner Bros. sat on this for ages and then finally released it directly to DVD/Blu-Ray which I think was a HUGE mistake, even though it made them a ton of bank.  In any case, I'm hoping for a sequel but since Warner Bros. has ditched it's direct-to-video division, it doesn't look like we'll get one.  Sad face.  Boo.

Once you watch it, though, you'll never break the rules again.  Sam is watching.  Always watching.