Wait. You're an Oscar™ Winner?

Elizabeth Shue and Jennifer Lawrence.  What the hell have you done? 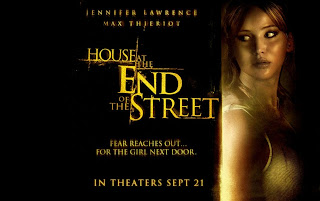 Let's talk about House at the End of the Street, shall we?  Spoilers, bitches.  Lots of 'em.

I'm OK with exposition, really, I am but when a movie starts out with a neighborhood party greeting the new folks, Oscar™-winning mom and pretty new girl, with the urban legend of the secretive boy next door and the murderous psycho girl who killed their parents who now lives in the woods and survives by hunting squirrels, you know you're in for a bad time.

And of course, pretty new girl falls in with the town jerk who takes her to a party.  Pretty new girl then deftly avoids date rape at the hands of town jerk so she makes this odd connection with the secretive boy next door when he saves her from a ten mile walk because WHO DECIDES THEY WANT TO WALK TEN MILES IN THE DARK INSTEAD OF SEEING IF THEY CAN GET A RIDE FROM SOMEONE ELSE AT THE PARTY?!?  Does no one see where this is going?  And then she just blurts out "Your sister killed your parents."  TACT, BITCH!  Learn it.

The locked door in the basement?  SERIOUSLY?!  Where they balls-out let us know where murderous psycho girl is living?  How about a little mystery, huh?  I mean, at least let me GUESS that murderous psycho girl is there.  Don't fucking bring her soup and a sedative.  And how does secretive boy next door manage to GET injectables?  Ya know for a mystery-thriller, I'm not getting a whole lot of mystery, here.

Enter middle-aged cop, who wants in Oscar™-winning mom's shorts.  He gets to make secretive boy next door likeable.  Something tells me this isn't going to work.

And, now, wait a minute.  Secretive boy next door is actually responsible for the playground accident that cause his sister to become murderous psycho girl?  And his parents were apparently high at the time so they didn't help at all?  What the hell?  Why did the parents have to be drug users?  Oh, yeah.  To give murderous psycho girl a REASON to kill them and to give secretive boy next door a reason to be overprotective.  Duh.

Oh, look.  Murderous psycho girl escaped into the woods because she's a crafty bitch who knows how to open a locked door even when she's pumped full of drugs.

MY LORD, IT'S ANOTHER UNCOMFORTABLE DINNER SCENE!!  And Oscar™-winning mom, who, as it was shown in other scenes, is not the best mom in the world, decides to lay down the law and basically kills the evening.  How rude.

I'm not even sure I can subject you to more of this.  This movie is PAINFUL.

But I will.  Because I love you.

So, pretty new girl decides to hang out with secretive boy next door against her mother's wishes... because we didn't all see THAT coming, and murderous psycho girl comes out to play with sharp things because irritating emo hipster music is just that annoying.  Secretive boy next door gets pretty new girl out of the house just in time to avoid being skewered and murderous psycho girl freaks out the neighbors by escaping and living out her urban legend status again.  Yay.

And... something happens while secretive boy next door is subduing her.  Did she pass out?  Is she dead?  Something snapped but it sounded like a twig.  Do we care?

Another party scene... and, like an idiot, pretty new girl invites secretive boy next door because he's not already a town pariah, and he gets into a fight because teenagers are assholes.  He wins the fight but the kids almost literally break out the torches and pitchforks to chase him to the old mi... I mean his house.  And, in the midst of all this the kid who lost the fight has his parents calling Ryan an animal and threatening to sue while middle-age cop is still hitting on Oscar™-winning mom.

IT HURTS!!  It really does.

Meanwhile, pretty new girl decides to snoop at secretive boy next door's house and discovers the sub-basement lair of murderous psycho girl.  WHAT THE HELL, WOMAN?!?

Well, what do you know?  Murderous psycho girl is still alive after all.  And she's muzzled.  And pretty new girl goes poking around in his garbage.  Because she's stupid.

OK, I'm not going to tell you any more, but this movie is some seriously fucked up, wannabe Psycho bullshit.  It's just... bad.  I mean, not even good bad.  It takes itself entirely too seriously, for one, and there's a lame-ass twist that just makes it sad.  So sad that I think I'll have to watch, like, a month's worth of My Little Pony to make the sad go away.  The acting is OK but the scriptwriter and the director need to be dragged into the street and shot.  Watch it if you want but make sure you don't pay for it.
Posted by BobSmash at 12:15 PM