I Fall To Pieces

Yes, I'll admit it.  I'm a sucker for a hard luck story and in horror movies, these tend to belong to lonely young women.  I'm not sure why it's so easy to write about a young woman dealing with her inner demons and reacting to the world around her but it seems to wedge itself into our subconscious so easily that I guess we never think about it.  In horror movies, though, those young women are usually psychotic.

Lucky McKee's 2002 indie masterpiece May is a prime example. 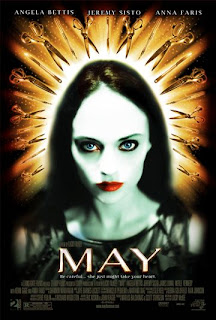 This movie made me uncomfortable in the way only a good slow-burn movie can.  And it IS a slow burn.  This is NOT a movie for the ADHD crowd (and, really, the only reason I got myself to sit and watch it is because I had the flu). In any case, it's good slow.  We don't need to have quick-cut scenes and MTV editing to have an enjoyable movie experience.

May is an interesting movie because it draws parallels to Carrie (which is why Angela Bettis got the starring role in the TV remake) without being too terribly obvious about it.  In fact, it's more like "What would happen if Carrie didn't develop that whole "I can destroy you with my mind" thing and actually survived high school?"

In this film, May is ostracized due to a lazy eye.  Petty, I know, but she spends her entire life being supremely self-conscious about it and because of her own imperfection, she is constantly on the lookout for a "perfect" friend to offset it.  Someone who is so perfect that she can ignore her own flaw.  Initially, this is a china doll given to her by her mother with the advice "If you can't find a friend, make one" that she is never allowed to remove from the glass case in which it resides... because Mom is a bitch.  Mom is the one who made her ashamed of her lazy eye.  Mom is the one that complained that the WRAPPING PAPER was ruined when May tore it opening the gift.  Mom is the one who gave her daughter a tiny, shaming mother-figure upon which to build all of her insecurities because, in classic horror movie fashion, the doll talks to her.  Because May is insane.  Like, completely binkers. 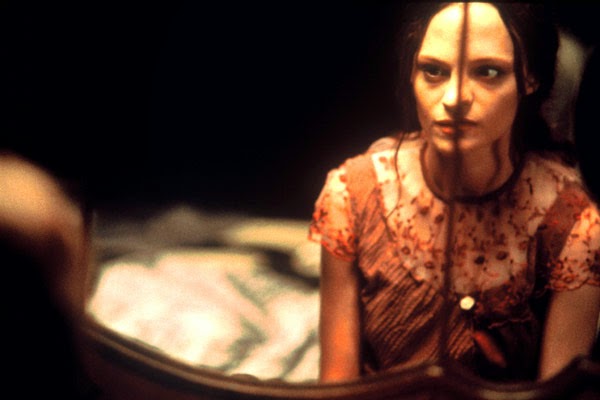 If we left it at that, this would be a standard slasher but, much like Carrie, McKee takes May a step further by actually giving the main character hope.  Hope that she can have friends.  Hope that she might not be stark, raving loony.  He gives her not only a boyfriend (Jeremy Sisto) but a girlfriend (Anna Faris), as well, and she finds herself (and us with her) focusing on those parts of them that she finds to be perfect.  Jeremy's hands, Anna's neck and we find ourselves looking through her good eye at others perfections as the film goes on.  Leering as May is (at EVERYBODY), we never get the feeling that we're stepping into "male gaze" territory and Bettis is WONDROUS in her ability to show a slow descent into a psychotic break.  Why this woman doesn't get more work in mainstream film is completely beyond me.

But, as her own insanity worsens, so do her relationships until she is ultimately rejected by Sisto AND Faris and, to top it all off, her cat.  Yes, her cat recognized the crazy and is thankful that he didn't stick it in her.  Faris and Sisto can't really say the same.  Do I really need to tell you where all this recognition of crazy leads?  When crazy gets recognized, crazy migrates to the nearest sharp object.

Crazy, though, at least in this case, is still sympathetic as a victim of poor self-image and parental shaming.

All in all, I highly recommend this movie.  It's a fantastic character study and, even as slow-paced as it is, it's a lot of fun to watch... you know... if you like madness ending in bloody murder and hints of necrophilia.  I could probably do without that last part but HEY!  Go watch the damn movie.
Posted by BobSmash at 11:11 AM