The hubby and I went to see Frankenweenie with some friends last night.  Scott was a little hesitant but he knew I'd been waiting for it. 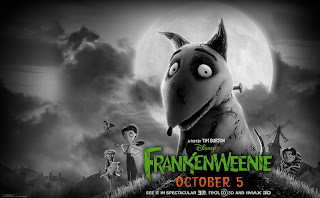 It's the tale of a boy and his dog.  And the desecration of corpses.  And perversions of science.  And weird girls who dig in the kitty litter.  And an entire school full of goth kids.  And blackmail.  And the Dutch.

Anybody who digs Tim Burton knows that this is the concept that got him fired from Disney.  It was too dark.  Now, Disney has embraced the spooky, I guess, because this movie is kinda awesome.  It gives us a glimpse of the director as a young boy (because we know that at least part of the story is autobiographical) and lovingly teases the classics like Godzilla, Frankenstein (obviously), The Mummy (poor Colossus), that weird ubiquitous hunchback... and I would seriously be having Children's Services look into his parents because no modern child gets a hunchback like that without at least a trip to the doctor and a plastic brace that inevitably gets magnets stuck to it during lunch.  Stupid scoliosis.  And gives us mutated sea monkeys.  Because monkeys are awesome. 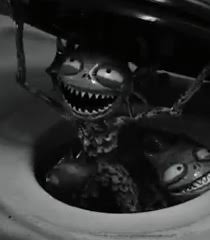 Plus?  It freaks out my friend.  Weird Girl (she has no other name) should justifiably haunt the dreams of everyone who glimpses her and her spooky-ass clairvoyant cat.  And bitch better wash her hands first.  I don't want no poop-stains on my subconscious. 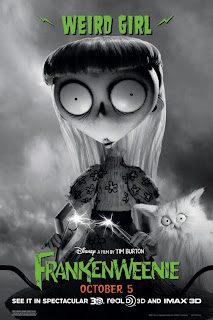 DO NOT, by the way, take the little ones.  Older kids are fine but even though the movie stays on the cutesy side of things, the end gets pretty intense and if you're going to take ANY kid with whom you haven't had the "Death Talk" with, yet, be prepared to do so either before or after the movie.  This generation hasn't had it's Mr. Hooper, yet.  Oh, hell, who am I kidding?  Anybody under the age of 30 hasn't had their Mr. Hooper, yet.  Thanks, PBS.  You traumatized a generation.