A Cuddle And A Kick Kill List is another "kind of brilliant" British multi-genre shocker that makes me think.

Above all, though, it really does make me think about morality and the choices we make and the extent to which can we be manipulated. 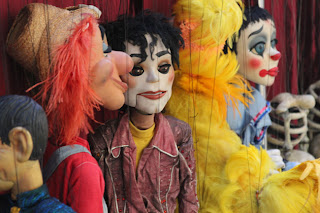 PINNOCCHIO LIED!!  No strings, my ass...


Kill List is one of those movies you have to see to believe and I did like it a lot.  It just takes patience to watch.  Much like A Serbian Film (which I do not recommend after a meal), Kill List takes us through the irredeemable fall of a once-reformed, for lack of a better word, "sinner".  A "sinner" who believes he's doing the right thing by his family when he returns to a life of contract killing.  He's ALMOST right when it turns out that his victims are pedophiles but then things go South. Hmm.  Hell has penguins.  Who knew?

About the strangest thing I can say about this movie is that it flips through genres like turning the pages of a children's book.  You know how I feel about multi-genre films but Kill List doesn't try to meld them together.  It finishes with one and moves to the next.  Personally, that's the best way to handle these things.  Because then you don't end up with a confusing pile of crap.

I can't really tell you more without spoiling it but I CAN say that this movie is kind of an emotional roller coaster.  It is, by turns, stark and funny, calm and cuckoo, as tender as a mother's kiss and as cruel as the desert sun.  It really does bring back the British horror of the late 60s/early 70s but gives it a modern edge.  The cinematography is fully designed to capture the mood and it is keenly felt.  It is gritty and it hurts to watch but in a good way.

Ultimately, Kill List is this generation's Wicker Man only without that asshole Nick Cage and the dentures he shares with Ellen Burstyn.

I think I need to dig up Witchfinder General, now.  A little Vincent Price never hurt nobody.
Posted by BobSmash at 11:21 AM