A Different Word For EVERYTHING!

The French are a fucked up people.  Not only is the 2006 Kim Shapiron film Sheitan one of the strangest films I've seen recently but it stars Vincent Cassel who is either entirely brilliant or completely bugfuck crazy. 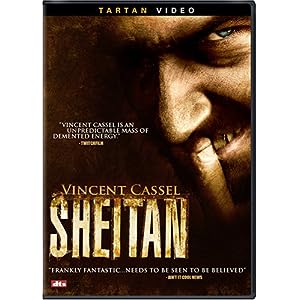 For those of you who don't recognize Vincent Cassel's name right away, he played Gilles De Rais in The Messenger with Milla Jovovich, Francois Toulour in Ocean's Twelve/Thirteen, Thomas Leroy in Black Swan and Marcus in Irréversible.  In my opinion?  NOT an attractive man.  Something about his REALLY WIDE five-head, the spacing of his eyes and his itty-bitty chin.  He looks like a bird.  Monica Belucci must be extremely happy in the sack, though, because they've been married for about 10 years, now. 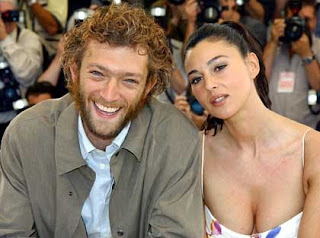 Here you go, straight boys.  Cleavage you will never have access to.

ANYWAY, so in Sheitan, the French version of The Jersey Shore cast gets thrown out of a nightclub (conveniently called "STYXX") on Christmas Eve and decide, "Oh, hey, I'm not done partying, yet.  Let's go with this girl we just met, whose name, coincidentally, is Eve, to her remote village and get wasted because French filmmakers are never subtle in their use of symbolism, particularly of the religious variety."

Is this EVER a good plan?

So yeah.  When a goat directly out of a medieval satanic woodcut blocks your path TURN AROUND!  Of course, they don't because jovial, yet creepy, farmhand Joseph (Cassel) comes to remove the goat from the path and get them unstuck from the mud with his weirdly strong legs.  He also follows them around like a puppy, gets them to go swimming at a hot spring and tries to pimp out his niece.

By the way, if'n you don't want to see some supremely ugly nekkid people, this movie probably ain't for you.  I'm all about the beauty of the human form but there's a difference between a skinny person and a toast rack.  Just sayin'.

After all of this, there's an extremely awkward discussion about sex over dinner (which happens to be goat... yes, goat).  I say it's awkward because Joseph, yet again, has inserted himself into their evening.  I'm wondering by this point how the hell you get this guy to go the fuck away.  "I'm sorry, dude.  You are more than twice our age, you look like the standard definition of "child molester" and I could SWEAR I saw a windowless white van over there so if you don't mind leaving us alone and going to hang out with the very pregnant wife you're currently bitching about upstairs, that would be awesome, k?"

The rest of the evening is all "kids trying to get laid while figuring out that there is something supremely wrong going on" but, you know, they're kids.  It takes a while. From a character standpoint, Joseph is obviously the best developed but the character of Bart (who started the whole mess by getting into the bar fight to begin with) kind of intrigued me, too.  He wants to pull of a brave front but he's highly insecure and, although nothing is said directly, I'm pretty sure that the character is supposed to be in the closet.  All of the others are fairly throw-away, including the one who's there cheating on his wife.

So, the movie itself... Overall, I liked it but your mileage may vary.  It most definitely has a gross-out quality to it that, oddly, doesn't detract from the film as much as some of the actors do.  The script is a little vague and it's even more vague when you realize you have to read subtitles.  (Don't get me wrong.  I LOVE subtitles.  Dubbing is usually just awful.  They just make my brian hurt from trying to concentrate on the dialogue AND the movie at the same time.)  Even this, though, isn't necessarily bad because the movie seems INTENTIONALLY vague.  And when you add in Frenchy McCrazypants, it ends up being this creepy thrill ride that sends slimey shivers into places you really don't want them.

I'm not sure penicillin will cure this one.  I'm pretty sure the only way to get rid of it is to pass it on to your friends.
Posted by BobSmash at 11:58 AM