When you hear the name "Bill Goldberg", Christmas does not immediately come to mind.

A wrestling ring, a lack of pants and a couple cans of whipped cream, maybe, but not Christmas.

David Steiman and Brett Ratner, on the other hand, decided to present us with this holiday tale of blood, gore and good, old-fashioned, barely disguised Jewish disdain of Christian holidays with Santa's Slay. 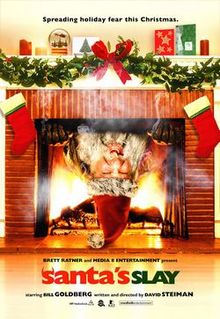 You would THINK that this would be just AWFUL, but any movie that STARTS with Fran Drescher and Chris Kattan getting massacred gets bonus points.

So, here's the story.

Santa Claus is actually the Anti-Christ whose story is told in The Book of Claus.  He is the result of a virgin birth produced by Satan and the only reason he's been giving gifts for the past thousand years instead of an annual day of slaying is because an angel beat him in a curling match.  This is told in Rankin-Bass-esque animation.

Did I mention that this was filmed in Canada? 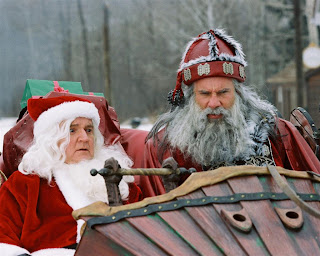 
So, anyway, in 2005, that deal ended so Santa is free to rampage across the Earth.  He apparently likes strippers unless they reject his advances, then it's roasted silicone on a stick.  His reindeer are man-eaters and, in general, he acts more like Krampus than the avuncular, Coke-swilling, carpet soiling, cookie munching, gift giver we all expect.

Now, you would THINK that this would be just plain AWFUL considering  Hulk Hogan's Hollywood career, but it's really not that bad. 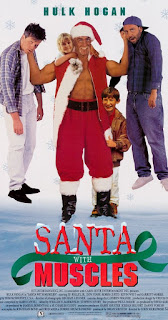 
For one, Goldberg doesn't talk that much.  That probably saves him.  For two, the whole movie is pretty much a giant fuck you to all of those assholes that are all "I'm a Christian, I hate all that PC "Happy Holidays" crap!"

I'ma step on my soapbox here for a second:  There are other religious and secular celebrations that occur in December.  Jewish folk don't force the rest of the world to say Happy Hannukah.  Africans don't force others to say Happy Kwanzaa. Happy Holidays spreads cheer to everyone.  Stop being selfish.  December belongs to everyone and, frankly, most of us just look forward to the paid days off.  If I give you a heartfelt "Happy Holidays", hushyerface and accept it.

Sorry about that.  Let's continue.

So, yeah.  This is, much like ThanksKilling (and pretty much any other holiday movie out there) a reason to bust out the Christmas puns and that's not necessarily bad.  This is surprisingly well-written and the acting isn't bad plus you get to hear Santa say "I'm Santa Claus, not fucking Dracula" so I say give it a watch.

Plus there's bad accents and Fran Drescher being set on fire and drowned in egg nog.

It's like they knew exactly what to get me for Christmas.
Posted by BobSmash at 11:50 AM