The day when our mom's would LOVE to be pampered and spoiled (but will really just settle for breakfast in bed (which she will not eat because toddlers aren't allowed near the stove for a reason) and us going outside for more than an hour at a time).

Or, if you're Lloyd and Charles Kaufman, the day where scary hillbilly mothers send their children out to rape and murder.  Of course, that's EVERY day to Troma films.  And, seriously, this is the entirety of the plot, barring the three girls that go all Rambo to protect themselves. 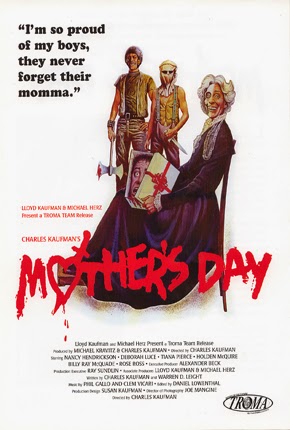 You would think, coming from the studio best known for The Toxic Avenger, that this would be one of the worst movies ever made. 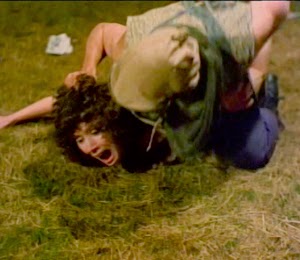 It's actually a decent movie.

I mean, it's obviously b-grade but considering that this is the 80s and we're smack in the middle of the era of girls all talking alike, the script and the acting are not bad at all.  They're just bad enough to make the entire movie hilarious, but the movie isn't at all painful to watch.

And it looks like Lloyd coughed up enough cash to make this a decent production.  We're not talking about the standard Troma "Sony Handi-Cams and Duct Tape" productions that we usually get.  They actually TRIED and sometimes it really is the thought that counts.

My mom taught me that.

She didn't teach me how to keep my mouth shut, but she taught me that the thought counts.

I love my mother but damn.  Really?