Today's third installment of "Holiday Horror" is a perennial favorite. 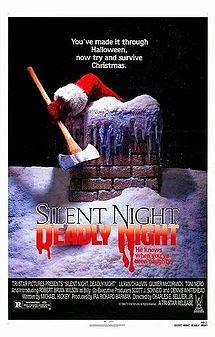 On November 9th, 1984, Charles Sellier Jr. gave horror fans a reason to look forward to the holidays.  Santa was here, bitches and he was PISSED.

OK, so it wasn't really Santa, but the idea of a killer in a Santa suit was a relatively untapped area of the psyche.  (At least, untapped in those who completely forgot about Christmas Evil just 4 years earlier.)  I mean, we all grew up with the stories.  Santa knows when you are sleeping, he knows when you're awake... Santa, apparently, has more wiretaps and surveillance cameras in place than the CIA and frankly, if you're not completely paranoid by the age of 5, you'll never be a believer. 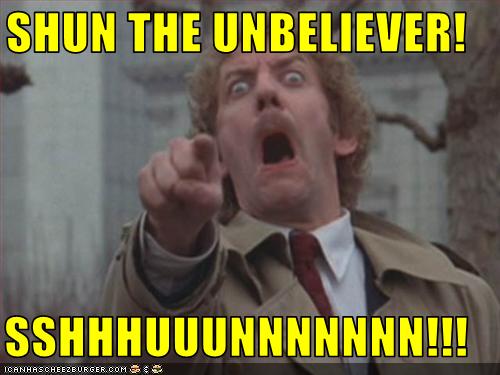 The story goes like this:  Kid witnesses his parents getting killed by a robber in a Santa suit and instead of becoming Batman, he goes completely binkers when he has to wear a Santa suit when working at a toy store for the holidays.  Seems to select victims by way of "naughty or nice".  No one is "nice".  Hilarity ensues.

Hey, I never said it was deep or complicated.

Now, considering that Nightmare on Elm Street came out the very next weekend, suffice it to say that this was quickly relegated to the bargain theaters but it still made a decent profit over all for an independent film.  In fact, it actually made a profit during it's opening weekend as compared to Nightmare which did not. And, yet, now we have to deal with THIS crap.

As I noted last week, one of the biggest reasons behind this movie making any money at all was because the PTA jumped it's shit because they didn't want kids exposed to a killer in a Santa Claus suit.  Not to mention, you know, gore and boobs.  Because kids that still believe in Santa are going to go rushing to the theaters to see this.  Because they're not watching cartoons or Sesame Street.  And they have a buttload of disposable income.

Half in the bank.  Half up his nose.
So, yeah, the PTA believes in what they say because the PTA is, for all intents and purposes, a mob, and we all know that the intelligence of a mob is that of it's least smart member divided by the number of people in said mob.  So, KNOWING that we're dealing with a fraction of an IQ point, horror fans spoke louder than the PTA to the tune of 1.5 million dollars in 1984 money which is "probably some ungodly amount that I'm not going to do the math for" in today money.

Now, as to how I actually FEEL about it?  It's not bad.  It's not GREAT but it does have that vintage grindhouse feel to it, even though there's a LOT of time stretching going on which makes it feel longer than it should.
It's worth it to see Linnea Quigley get impaled on a mounted deer, though. Her big, ol' fakeys a-jigglin' away.  Well... as much as they can.  Silicone does not equal Jell-o.
Posted by BobSmash at 12:52 PM