In 1984, my 11-year-old self NEEEEEEDED to see Gremlins.  It was to be the most awesome-est movie my childhood would ever witness. 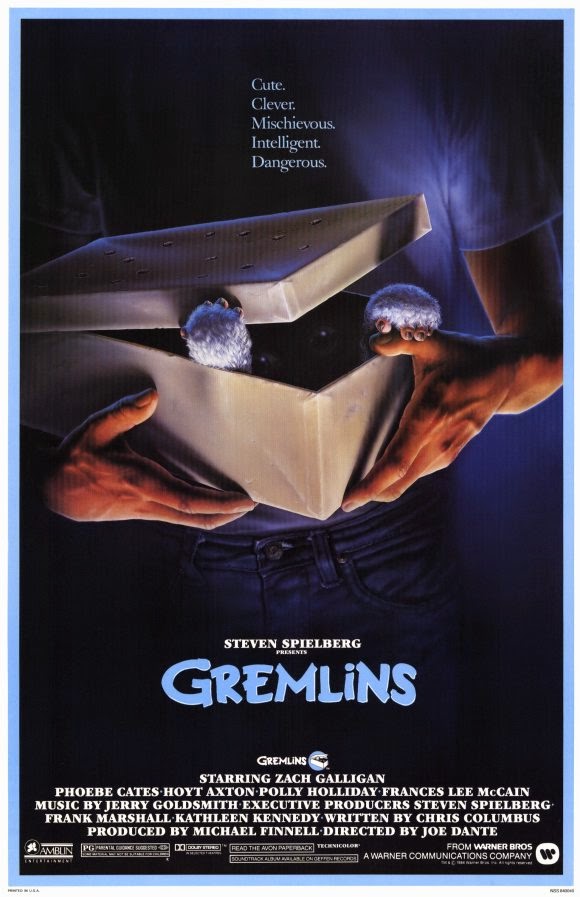 Stephen Spielberg and Joe Dante gave us a tale of buyer's remorse gone horribly, and hilariously, wrong and a couple of the most memorable creatures in the annuls of horror.

In case you have not seen this movie, shoot yourself right n... what's that?  Oh.  Dammit.  My lawyers tell me that instead of shooting yourself, you should pick Gremlins up on DVD at your earliest convenience.  In fact, it probably comes in a box set with Gremlins 2, The New Batch, which is also completely awesome although the humor isn't so dark and, in fact, veers directly into the goofy.

So, the story goes like this:  Randall Peltzer, an inventor, is coming back from a sales pitch meeting but has forgotten to purchase a Christmas gift for his son.  He stops in an old Chinese junk shop and tries to badger an old guy into selling him a creature known as a mogwai.  Old and Crusty tells him no because it's a huge responsibility but as Dad is leaving, the old man's grandson sells it to him, anyway because they need the cash and grampa is stubborn.  He makes sure, though, to inform Randall of the rules.

You all know the rules.  Say them with me, now.

1)  DO NOT expose it to bright light, especially sunlight (because it is, apparently, Irish and it burns easy).
2)  DO NOT get it wet (because wet fur smells gross).
And, most importantly,
3)  NEVER, EVER FEED IT AFTER MIDNIGHT!!  This is very, very important.  SO important that they don't tell you exactly WHEN "after midnight" stops.  But, the rule also includes the provisos "no matter how much they cry, no matter how much they beg" so you KNOW it's ominous.

He names the calm, cool, collected and somewhat shy mogwai Gizmo, to the delight every child and merchandising agent in the world, and brings it home to Kingston Falls.

Enter Billy, Our Hero.  Boyfriend of Pheobe Cates (the fearer of Christmas), befriended of Corey Feldman and the asshole who, almost immediately, accidentally spills a glass of water on poor Gizmo, thus painfully creating more mogwai (because water is what they use to breed) who are not so calm, cool and collected and unplug Billy's alarm clock causing Billy to accidentally feed them after midnight (which turns them into the titular Gremlins) and unleashes the avalanche of craziness that soon overtakes the town.  Awesome, hilarious, craziness. 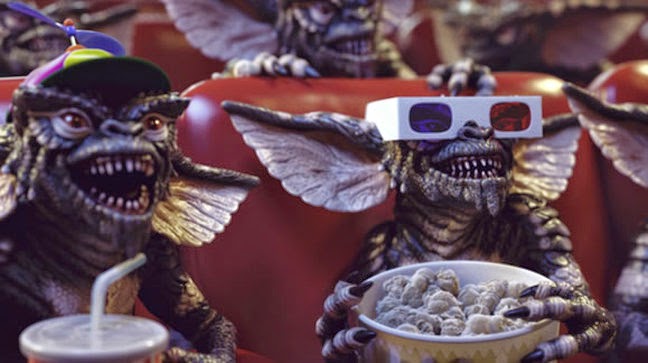 Now, while the gremlins, themselves, are now iconic, Stripe, the leader, is memorable as the be-mohawked leader and is the cause of many a childhood nightmare (and, oddly, many an adult fetish... fuckin' Rule 34).

We all know that I can't stand PG horror but this was the holy grail to me as a kid.  Because it DID parody those 1950s "perfect little town gets invaded" films like The Blob and it was a modern fairy tale, what with its mysterious places and the cranky old lady and the rules that must be followed and the fact that it was the first horror movie that I got to watch without an adult present.  A lot of critics, however, were rough on it because of the level of violence.  This, along with Indiana Jones and the Temple of Doom, were directly responsible for the PG-13 rating that was added to the MPAA ratings system two months after Gremlins' release.

And it's all this guy's fault.

But, you know what?

It's still perfect to me, now.  I firmly believe that this is a modern horror classic that people should share with their children.  This is the hug and a cookie of horror movies and I adore it.

Nifty piece of trivia before you go?

The novelization of Gremlins actually gave them an origin:  They were genetically engineered, peaceful, contemplative creatures created on an alien world but they were biologically unstable, thus, the rules.

No origin was mentioned for them in either movie.
Posted by BobSmash at 11:44 AM