OH GAWD MY EYYYYYYYYYES!!  WHY DOES THIS EXIIIIIIIIST!?!  WHAT LOVING GOD WOULD ALLOW THANKSKILLING TO BE MADE?!? 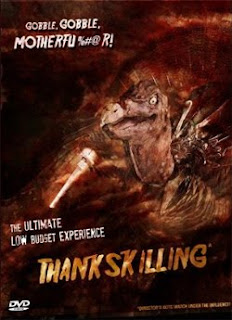 Before I go forward with this review let me preface with a disclaimer:

I actually did enjoy this movie but that is because I am a sick motherfucker that likes puppet shows.  Not like THAT, ya pervs.

No, this movie is unabashedly low budget, makes no pains to hide it and seems to strive for that ironic "let's be awful for the sake of being awful" feel that only bloggers and drag queens seem to get right.

It's got the trifecta of awfulness.  Bad acting, bad writing and bad special effects.  LOVE IT!

And a turkey puppet in a flesh mask being mistaken for a main character's father.


All this and MORE await you in this wonderful land of grindhouse horror and potential drinking games.  (Seriously, though, do NOT play a drinking game to this movie.  You will die and the sound of a liver drying to a withered husk is a horrible thing..  I do not want you to die.  I barely get site traffic as it is.)

The movie starts out with pilgrim boobs, even.  Like... STARTS with them.  Not that they interest me, PERSONALLY, but I'm sure there are some of you that feel a need to see a pilgrim running from a turkey puppet topless. 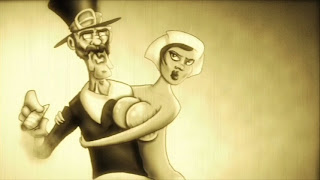 Yes, this is in the movie, too, because everyone likes cartoons.

So, anyway, turns out that this turkey was necromanced (yes, that is a word they used in the movie) to punish the white man for stealing the Native Americans' land.  Beyond that, the only plot is "five friends from college go home for Thanksgiving break and get caught up in shenanigans after a redneck's dog pees on the turkey's mystical talisman."  It only goes downhill from there.

I mean, I'm not even sure this can even be called B-grade.  I mean, in all of the complexity of film don't we have more "grades" than A and B?  Is there a ZZZ-Grade somewhere?

Seriously, kids, this makes Piranha 3DD look like The Color Purple by comparison.  This movie LIVES on puns.  ALL THE PUNS.  There are none left.  You cannot have any.  No puns for you.

But, if you want to see boobs, moobs, ugly hillbillies with no purpose, possessed turkeys represented by puppets, gravy-flavored mini-condoms, a shotgun blast from the INSIDE and repeated use of the joke "Her legs are harder to close than the Jon-Benet Ramsey case," this movie is for you.

As an extra bonus, I even watched ThanksKilling 3, which, beyond all reason, is a worse puppet show than Meet the Feebles.  There is no ThanksKilling 2 and this is actually an integral part of 3.  Add a Thanksgiving themed theme-park, a gangsta rapper grandma, a gay space worm and a robot that shoots vortices out of it's ass and you know what kind of hell I put up with for you people.

You owe me.  I accept turkey legs.
Posted by BobSmash at 3:24 AM