Let's get right to this shall we? 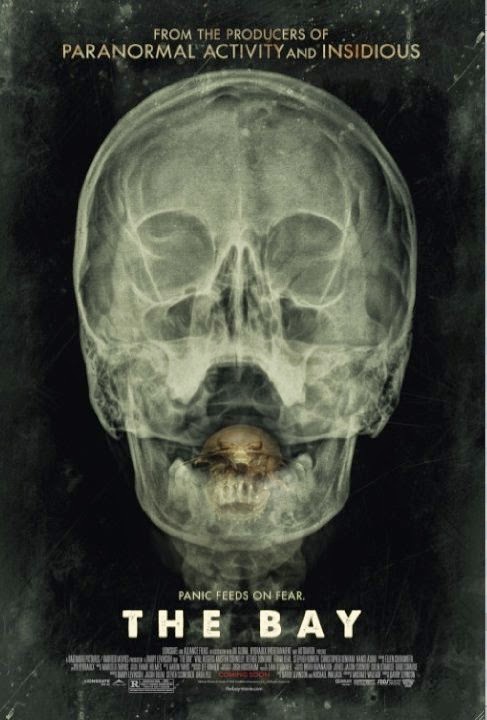 In 'The Bay', Barry Levinson, Director of Wag the Dog and that unsung masterpiece Young Sherlock Holmes (I'm serious.. stop laughing at me...) brings us on a journey.

OK, so, this one isn't going to be an Oscar™ contender anytime soon.  Particularly not since Cloud Atlas has been released and everybody loves a good allegory for gender transition. I'll tell you where it is.  It's hiding in a found footage movie that actually has some great practical effects and some fair to middlin' CGI and tells us the story of a town ravaged by a parasitic infestation through its own missteps.  And by "fair to middlin' CGI", I mean CGI that almost blended into the scenery but was still very obviously CGI which was distracting but not to the point of making me want to strangle a coder.  While this is not a great movie by any stretch of the imagination, it's still enjoyable.

But you're not here to hear that.

First off, the voice-over by Kristin Connolly, while somewhat helpful, sounds like someone let a hive of bees loose in my head.  I liked her much better in Cabin in the Woods.  Just FYI?  Droning is not an effective way to pass on information.

Second, this movie is about as clear as mud until it comes to its anvilicious environmental message.  Yes, yes, we know that growth hormones and mass chicken farming is bad but, seriously?  They threw every environmental problem AND the kitchen sink at us.  Hormones, chemicals, desalinization plant, chicken shit, hormones AND a nuclear reactor leak? Step off, hippie!  The choir.  You preach to it. 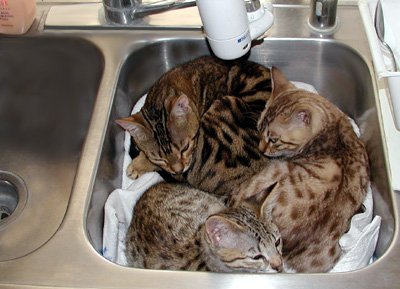 The only thing we're missing is kittens.  So, here's some kittens.

I'm not against a horror movie having a socio-political message.  Night of the Living Dead was a subtle jab at 60's Cold War politics and domestic racism.  Dawn of the Dead was a less subtle jab at crass consumerism.  Romero did it RIGHT, though.  The message was there but Romero didn't treat it like a sack of nickles and my psyche didn't leave the film feeling like it had been raped by Al Gore.

Third, and finally, can you PLEASE hire some decent actors?  I realize that you had to cast an entire town but if you're gonna give people lines, please make sure they can say them and make us believe it.  Every single one of these background people went to the William Shatner school of acting.  "I can't.  Find my.  Husband.  Take me to.  The hospital, I'm.  So scared."

Now, I WILL tell you that this movie veers into cryptid territory which is actually creepy and why I didn't completely hate this movie BUT the animal on which the infestation is based is very, very real.  No, I am not shitting you.  They are real.  They are aggressive.  They are pale.  So very pale.

Cymothoa exigua, owner of the creepiest Snidely Whiplash mustache in all of the animal kingdom, is a type of oceanic louse that gets into a fish by the gills and then proceeds to remove it's hosts tongue before hunkering down in the new tongue socket so it can enjoy a hearty meal of blood and fish mucus.  Eew.  They CANNOT, in case anyone is wondering, get as big as the movie claims.  There are some isopods, Bathynomus giganteus, that DO get to be a couple of feet long, but they aren't the "tongue-eating" variety.  They're the "dead whale at the bottom of the ocean eating" variety.

Or the wily and elusive "Dorito eating" variety.

I, for one, will never look at those tiny pill-bugs in the garden the same way.

Back to the movie, all-in-all, the PREMISE of this movie is pretty fuckin' rad but the execution was lackluster.  I'd even go so far as to say bland.  I say check it out and make up your own mind but I think it could have been great if someone had spent some time tweaking it instead of being all "MAKE PEOPLE GIVE ME THEIR MONEY" about it.

Edit:  To make this absolutely clear, since I have been informed that people don't know whether or not I like this movie, This movie is OK.  It's not great.  It's not a game changer.  It's an OK way to spend a couple of hours but ultimately, BECAUSE I find it to be all bland-like I can't tell you whether to like it or not.  It's really one of those movies that I'm not sure people will remember but I do encourage you to make that decision yourself.
Posted by BobSmash at 11:23 AM