Slither is one of those horror movies of which I have never heard a bad review, 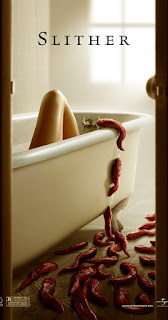 I firmly believe this is because Nathan Fillion stars in it.  Don't get me wrong.  Monsieur Fillion is a brilliant actor and he is eminently attractive.  I can most certainly see the appeal.  This is why conventions are full of Firefly Browncoats and teenage girls wearing silly orange hats that look like Grandma went on a creme de menthe bender and had to get rid of leftover ugly Christmas sweater yarn. 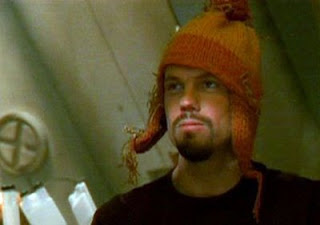 NOT Nathan Fillion.  Almost as good.  I'll be in my bunk.

But I digress.  Slither is an odd duck.  It's an alien invasion movie, it's a zombie movie, it's a David Cronenberg Body Horror extravaganza.  It's a LOT of things and you all KNOW how I hate mixing genres.  In this case, though, because it really doesn't take itself seriously, it works.  It works really well.  It works a LOT better than it's original form, Night of the Creeps. 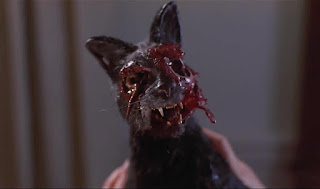 Trust me.  This cat is much more shocked than I am.

I really don't know how to break this down, plot-wise, for you.  Town asshole gets infected by alien slug, screws around with his wife's sister, turns her into boob monster that can only eat rotted meat, she explodes in a shower of alien zombie slugs and everybody in town except for the sheriff and a select few others get sucked into some kind of twisted perma-orgy that has to be seen to be believed.  And these are not pretty naked people.  Ain't no supermodels here.  It's like catching your history professor at a bathhouse. 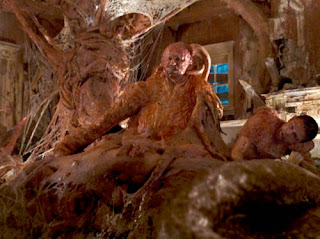 The thing that makes it work is that it evolves in clearly defined stages and it evokes this kind of '50s B-movie plot that seems really simplistic at first but then grows into a slavering beast of a film that is seriously underrated.  It's what those '50s horror movies wanted to be but couldn't because of limitations in special effects and the bane of all film, the Hays Code.

The Hays Code wouldn't allow boob-monsters, for one.

What makes Slither interesting to me is that it's obviously a sex/STD/abusive relationship allegory but you're never quite sure which one it is at any time because you're so focused on how FREAKIN' AWESOME this movie is.

In any case, Nathan Fillion plays to his strengths as the small-town sheriff.  He's all corn-fed and adorable and just all-around likeable.  I know he's capable of much more as an actor but everybody I know just wants to hug the man and possibly steal his spaceship.
Let the man save the planet first, OK?  Sheesh.
Posted by BobSmash at 11:11 AM