All I Want For Christmas Is...

You remember how I totally hated Elves?

I found a low-budget pun-tastic masterpiece that TOTALLY makes up for it!

In 2006, Jamie Nash and David Sckrabulis apparently OD'd on candy canes and nutmeg and gave us: 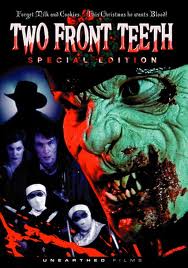 Gabe Snow, intrepid tabloid reporter, just fucking hates Christmas.  Seeing as how he accidentally killed his family with Christmas cookies, I guess he has a good reason.  SO, yeah.  His life just sucks.  It's the holiday season and he's chasing down the cause of the crash of flight 1225 (it had something to do with a flying creature with a red nose).  In the meantime, he's got a kinda crappy boss (who gives him a gun for Christmas... go fig...), a crappy car and a bitch of a wife who's cheating on him with a mall Santa... only not, because she's never actually had sex with the mall Santa.  She's still a raging bitch, though.

So, anyway, in the midst of leaving mall Santa with a delightful shade of  "Jack Frost" blue balls, they get attacked by elves.  Not crappy fuckin' puppets this time, either.  This guy: 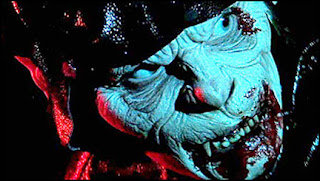 Trust me.  This one doesn't like toys, pointy shoes or dentistry.

So, anyway, he grows a pair and goes home to confront his wife and finds that she's been tied up and her paramour has been beheaded and used as part of the train decor.  Now, he has to protect himself and his wife and friends from the elves, who are out to reclaim Rudolph's nose for use in strange and arcane things, and their master, the dreaded CLAUSFERATU! 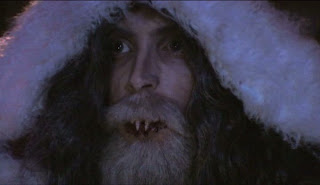 Yes, Virginia, there is a Clausferatu.

Those friends, by the way, include Gabe's new buddy, a duster-wearing gunsmith who knows the REAL meaning of Christmas, his boss (really?), and the rubber-clad, sword-swinging nuns, the Silent Knights. 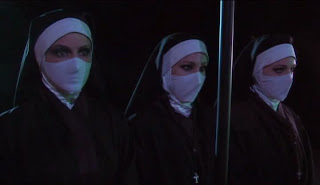 Now, while this movie is DEFINITELY better when seen through a haze of eggnog and hooch, for a microbudget, it's actually pretty damn good.  It's crazy as FUCK, what with it's complete adherence to Christmas puns and being interspersed with cheesy animation that's reminiscent of the Rankin-Bass holiday specials, but it's got good actors and, oddly, as chock full o'puns as it is, a great script.  You can kinda tell it was shot directly to digital which just adds to its charm and the special effects... aren't... special... but, still, they don't take away from the experience.

Are there better holiday-themed horror movies?  Yes.  Are there better actors?  Yes.  Are any of them going to be more memorable than S&M-clad killer Elves that talk like they belong on the cover of the Necronomicon Ex Mortis and a goofy Mexican stand-off featuring fruitcake?

If you can find this one, watch it.  Watch it HARD.  Be careful, though, it might get you sticky.