There are times when I miss The Facts of Life.  Oddly, though Tootie and Natalie stole the show (and Blaire ended up being a complete cunt-bag in real life, too, what with being an active member of a known hate group), I miss Molly Ringwald. 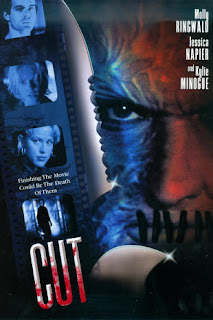 And then I realized that that wasn't such a great idea.

It's not that it's a BAD movie, it's just not a GOOD movie.  It's one of those fair-to-middlin' turn-off-your-brain supernatural slashers that was never intended to make you think.

Not that slashers are EVER intended to make you think but this was seriously all "Duuuuuuuuuuuuuuuh, tell me about the rabbits, George."

But, hey, it had Molly Rngwald in it.  And, of all people, Kylie Minogue. 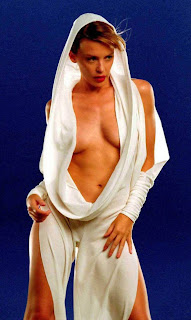 Sorry, straight boys.  She did not dress like this.
But here's some side-boob for ya.

So, here's the story:  There's this cursed film, see, that's never been finished and this film student wants to be the latest in line to attempt to complete the film.  She's warned against it but goes ahead, anyway, managing to get a washed up actress to play the lead.  Enter Ringwald who is playing against type as kind of a mega-bitch.  Good for her. 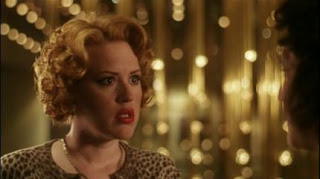 Did you even READ the contract rider?
I said YELLOW Skittles!

Filming goes on as planned, people start dying, they realize that the killer is coming from the already developed film form the PREVIOUS attempts, yadda, yadda, more people die, yadda, burn the film to kill him, yadda, yadda.

No trip to Mordor?  No fires of Mount Doom?  No hobbitses?
Just a gasoline fire?

I mean, I'm all about a lackluster plot and some of the acting was done well, y'know, because Ringwald and Minogue are professionals but dang there has to be SOMETHING to like about a movie and here there just... wasn't.  This isn't even worth remembering.  Even the special effects were just blah.  Like, seriously, just dry white toast.  This is the wallpaper paste of horror movies.  I know Ringwald and Minogue HAD to be all "just pay me so I can forget I was ever a part of this".