Hidey-Ho, kids!  Today, on a very special Candy-Coated Razor Blades, we're going to review a very special movie and it's all about mommies and daddies. 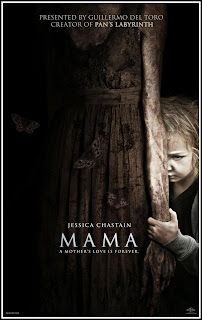 Before we get started, you need to watch this:


Andy Muschietti (NOT Guillermo Del Toro, by the way, so get that out of your heads right now) gives us, in three minutes, pulse-pounding fear.  Now take that fear and expand it over an hour and a half.

The story (and since this is new, I'll try not to give away too many spoilers) is that a man during the 2008 financial crisis goes crazy-cuckoo-pants and takes his two young daughters, Victoria, age 3, and Lily, age 1, on what is meant to be their last road trip.  As he enters his last stage of madness and takes aim at Victoria (after taking off her ZOMGSOCUTE toddler glasses so she couldn't see (this is important but I'm not gonna tell you why even though it's only important for a little while)), she is rescued by a very visible otherworldly force.  This force is what will be known through the rest of the film as Mama.  Mama feeds the kids cherries.  Because cherries are awesome.

Fast forward about 5 years and the children's uncle, (Lucas, their father's identical twin) is still looking for them.  He has blown through the entire inheritance he received from his brother to do so.  And while this is noble, I am not that good a person.  (Sorry, kids.  Uncle Bob loves you but he still has to eat.)  Uncle Luke has a girlfriend, Annabel, who is very glad she is not pregnant because that means she can still play in a rock band and eat Apple Jacks and not have to share them with a howling poop-monster because babies are, like, totally gross, man.  Much to Annabel's chagrin, they find the kids on the very day she fails a pregnancy test. 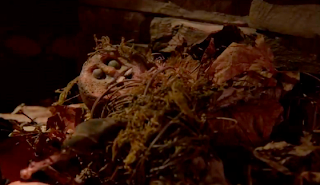 This doll was with them.  Because feral children love forest debris.

Enter Dr. Dreyfus, who is caring for the girls and who REALLY wants to get famous on that whole "raised by wolves" angle, and Aunt Jean who's just a raging cunt.  Dreyfus agrees to help Lucas keep custody of the girls if he gets to keep studying them.  Then the fun really starts.  Mama comes looking for her adopted young'uns and she is NOT happy about it.

Now, I'm gonna say right off the bat that this movie is not perfect by any means but as this is Muschietti's first time out of the gates, I'm willing to forgive a LOT. For one thing, we are never under any pretense at all that this is NOT a ghost story/fairy tale.  He left NOTHING to the imagination in that regard.  We started with "Once upon a time..." and we were always dealing directly with Mama and Mama was a jealous, hurting entity.  Muschietti even lets us see Mama's face early on in the film which is kind of a cinematic no-no.  Muschietti, you get a time-out.  Go to your naughty stool.

Next, we're dealing with a director that hasn't, yet, found HIS voice.  While the story itself is original, and refreshing in that regard, almost everything in the film can be traced back to another movie.  We know this is deliberate but it's a little distracting.  About the only thing that was original (and completely awesome) was the fact that Mama moved like all of her bones were broken in multiple spots.  It gave her a definite "I'm dead, I know it and I'm pissed about it" quality. 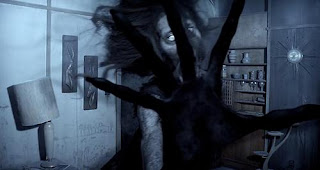 All-in all, though, even without ANY gore at all, because this is a classy ghost story and shit, this is a thrill-a-minute that I would gladly watch over and over again.  Preferably in a theater full of screamers because that's how I saw it the first time and they were GLORIOUS.  Like a hellish choir.  It even got me a few times and I'm not easy to scare.

Also, you might want to bring tissues.  There are some genuinely touching moments which just confirm to me that Muschietti needs to direct more and find his own place in cinematic history.

I am a marshmallow.
Posted by BobSmash at 8:42 AM