So, anyway, apparently, Australians spend their entire lives in fear.  Maybe it's from being descended from criminals, I don't know, but these are some truly paranoid individuals.

And considering this guy's prom date, they have every right to be. 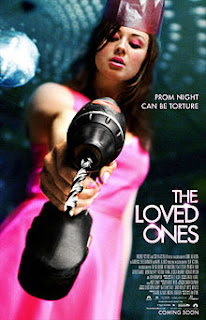 For those of you who have NOT seen this twisted, little gem, Brent (played by Xavier Samuel) goes all Goth LiveJournal Poetry after a car accident that killed his dad (caused by a beaten and bloody dude just kinda wanderin' into the street (this is important).  He gets asked to go to the prom by Lola (Robin McLeavy), who is not his girlfriend, and turns her down (quite nicely, actually).  We kind of get the idea that Lola isn't quite right when she spies on Brent and his girl making out in the parking lot.

During Brent's daily ritual of brooding, he gets knocked unconscious and wakes up tied to a chair at a tacky dinette set with Lola, her dad (John Brumpton) and Bright-Eyes, their pet vegetable.  Since Lola wasn't invited to the school dance, Dad turned the house into a prom for her.  Complete with paper crowns, disco balls, pretty dresses and cordless drills, knives and syringes full of bleach to keep her date from screaming.  (I STILL want to know where these people get syringes.) 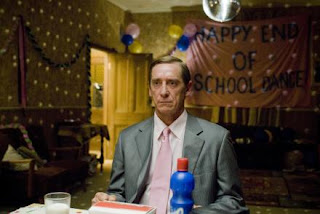 And the rest of the night is spent showing us exactly how twisted Pretty Princess Lola really is.  The girl may not be the most creative torturer on the planet but she certainly makes do with the materials she has at hand.  And she's had practice.  A lot of it.
Just in case you're wondering, it's kind of amazing what you can do with a fork and a handful of salt. 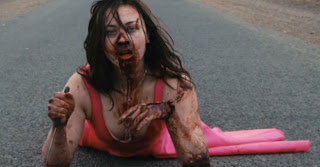 EEW!  Look what you did to my DRESS!
This is yet another instance of a FANTASTIC first time out for a new director.   Sean Byrne is definitely a director to watch.  The film is flawed but it DOES give us a frenzied blend of Pretty in Pink, Carrie, Prom Night, and Hostel which is kind of amazing to watch.  The comedy elements do kind of shock you out of the horror every so often, but they work.  I definitely rank this up there with Mum and Dad in terms of sheer awesome.

Unless you absolutely cannot stand torture horror, this should DEFINITELY be on your list.