What You Need Is a Big Shoe...

In 1997, Mira Sorvino was a hot ticket.  Everyone loved her mush-mouthed performance in Romy and Michelle's High School Reunion wherein our heroine touts Mono as the best diet ever.

Yes, I adore that movie.  Don't judge me.

ANYWAY, later, that year, we get to hear Mira mumble her way through a kind of rad horror movie about giant bugs.  Guillermo Del Toro's "Mimic". 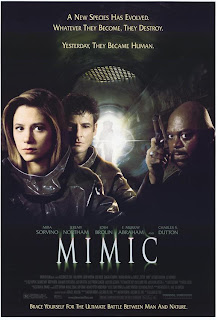 So, Mira, in an effort to make herself look intelligent again, plays an entomologist (bug doctor for you folks that hate the big words) who, with her husband/lab partner, genetically engineers a species of insect called the Judas Breed that's part termite, part praying mantis.  And it's from this point in time that we're fairly certain that Del Toro is Catholic.

Anyway, they did this because the cockroaches in the city were killing kids by spreading some kind of disease that's not really defined but it's bad enough to warrant a blood hunt on every damn cockroach in New York City.  (Which, by the way, is totally bad science because cockroaches are probably one of the cleanest insects on the planet and would only spread any kind of microbial horror passively at best.  They're CONSTANTLY cleaning themselves like gross little cats.  Microbes don't even stick to them that well so, really, they're only as dirty as what they're standing on.)  The Judas Breed infiltrates the roaches and kills them off by releasing an enzyme that speeds up their metabolism thereby killing them off with old age.

Fast forward to now where the world is bright and sunny again and Mira has a running relationship with a couple of kids in the neighborhood who bring her samples.  The kids bring her a huge bug they'd never seen before.   It turns out to be a Judas Breed but that's not possible because they were bred to only produce one male who was fertile and since they kept that one, there shouldn't have been any more of them. 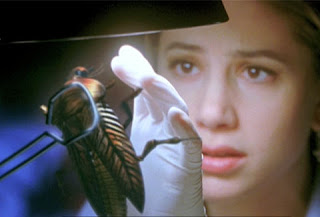 As we all know, in ANY situation wherein a genetically enhanced organism is not supposed to breed, it finds a way to do the horizontal mambo and get with the baby-daddying.  Because humans are fucking dumb. 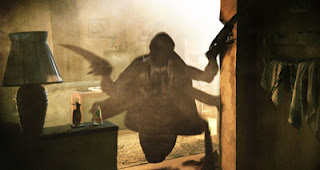 I got somethin' for ya little girl...

Now, don't get me wrong.  This movie is pure trash and I, like a dog, will happily roll around in the stinky.  Del Toro wasn't going for art in this one, he was going for the scare and considering he's one of the few directors to bypass the infant immortality rate, I applaud him and everything he does.

This is B-Grade schlock pretending to be A-Grade thriller and doing a damn good job of it.  It should be a part of everyone's horror collection.
Posted by BobSmash at 11:49 AM