Remember how I said that the British were awesome at horror?

I kind of take that back.  Just a little, though.

See, I watched Inbred this weekend and it left me with a strange feeling of unease. 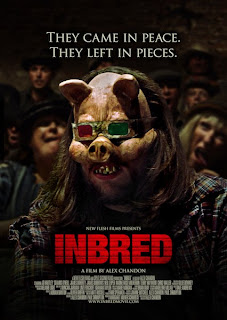 It doesn't take a rocket scientist to figure out that this is trying to be Britain's answer to the Texas Chainsaw Massacre.  Hell, the poster practically SCREAMS Cannibal Clan.  And, to be fair, it's not a bad watch.  There's just too much wrong with it for me to not say anything.

In terms of story, there's not really a lot there.  A couple of case workers bring their young charges to the country for fresh air and some good hard work to get the evil out of their sinews.  We've got your standard bunch of kids, the pyro, the asshole, the black kid and the girl, all of them in the system for fairly unknown reasons except for the pyro.  Case worker number one is big, jovial, Laugh-a-lot Bear who's entirely too naive to be doing case work and case worker number two is Practical-Woman who obviously knows that the best way to the kids hearts is a trip to the local pub.  On the way into this tiny town, the kids see this out the car window: 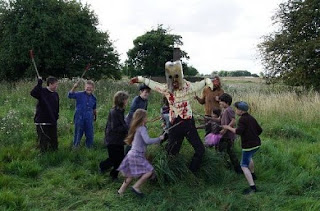 Because EVERY kid LOVES a game of Shank the Scarecrow.

The local pub is run by the guy who's in charge of the whole town.  Which should tell you plenty given the name of the movie.  Dude apparently sticks it in EVERYBODY.  His wife makes "scratchin's" (supposedly pork rinds) that come in two varieties, hairy or wet.  There's a guy with a carrot fetish that harasses the girl.

Anyway, the next day, the kids are brought to the train yard to be taught how to salvage.

Wait, really?  We teach kids to do this, thus training them for a lifetime of  vandalism and air conditioner theft?  Wow.  Way to go, Britain.

So... the kids run afoul of carrot guy again and try and report him to Pub dude while, at the same time, trying to get medical attention for Laugh-a-Lot who managed to slash his own femoral artery.  Pub dude decides to behead Laugh-a-Lot, lock the rest of them in a store room and put on a minstral show.

Yeah, so there's the end of our plot.  The rest is "Let's kill people in new and interesting ways."  No, seriously.  That's it.  It's fun to watch.  Especially when you deal with Boo Radley in Drag.

Tell me about the rabbits, George.


But, really, there's nothing else of substance.  There's humor, in the form of the Ferret guy with the mysterious "incident" that causes him to be left out of the festivities and some in the show itself, but really the rest is somewhat badly acted "OMGWE'RERUNNINGFOROURLIVESALLBREATHLESSANDSHIT!!"

Add to that all of the conspicuously awful CGI: 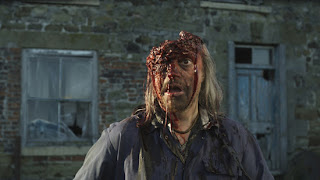 
And you've got a halfway decent watch but one that is not the best way to spend your time.