There seems to be a lot of hype, lately, concerning Jen and Sylvia Soska's latest picture, American Mary.

And it's WELL-FUCKING DESERVED!  I have been waiting to see this for AGES and I finally broke down and bought the blu-ray and had it shipped from the UK.  I'm REALLY fucking glad that I didn't waste my money on this.  It MORE than makes up for Texas Chainsaw 3D. 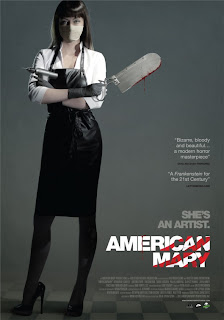 After their insane romp through Action-Movie-Land in Dead Hooker In a Trunk the Twisted Twins were recognized as the new mistresses of gore.  I don't think (and I kind of don't hope) that we will get a sequel to Dead Hooker but American Mary cements the sisters as the leaders of the pack in the new generation of horror directors and reaffirms Katherine Isabelle (Ginger Snaps) as the best Canadian export since Yukon Jack. 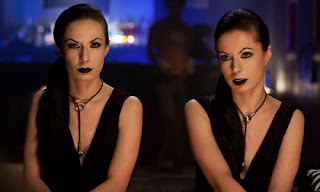 These two.  Such madness.  It's sweet, really.

In American Mary, we're introduced to... ummm... well... Mary.  We're never actually told where Mary is from but it is assumed "America".  Somewhere in the Northwest that is a couple of days from L.A. (revealed close to the end).  She's a med student.  Apparently a damn good one, according to her professor but he's an asshole so whether or not you choose to agree with him is totally on you.

Mary, like any other promising med student, has a fantastic apartment but lives on ramen and hope and she's behind in her bills.  The only reason she has turkey in the house is to practice her suturing.  Seriously, woman?  Stitch the bitches up and DEEP FRY THEM!  It's TURKEY!  Widely recognized as "eatin' bird".

So, she loses her restaurant gig and, like any other promising med student (there's a theme, here), decides, "Hey, I'm kinda hot," and goes to get a job as a stripper.  She brings a resume.  Because sleazy strip clubs check references.  In the middle of her "application", something goes down where a doctor is needed and she gets paid five grand to take care of it.  Insert "huddled in the shower sobbing" scene here.

Apparently, her resume gets passed around because we're then, creepily, introduced to Beatress (Tristan Risk who has a WONDERFUL career ahead of her as a character actress), a young woman with a LOT of disposable cash and a penchant for plastic surgery so she can look like Betty Boop. 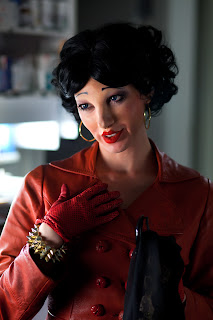 Beatress introduces her to the world of body modification with the help of a buttload of cash.  Mary, like any other promising med student, reluctantly takes her up on the offer and it only gets better from here.

If you think I'm going any further than this, you're sadly mistaken.  This really is a movie that any good horror fan MUST see.  It's a slick and beautiful revenge flick and brings torture horror to a new level.  This is the new generations' I Spit On Your Grave.  There is blacker-than-black humor ALL up in this piece.  No, seriously, there are parts of this movie that are genuinely hilarious and Katherine Isabelle deadpans her way through every inch of celluloid. 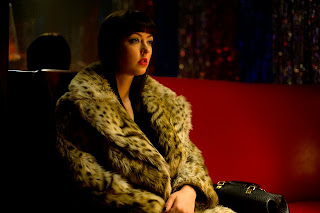 There's just the right amount of gore in this one.  It's not overdone and it fits perfectly into the piece.  It's actually a loving shout-out to the body mod community and while there are some pieces that the Soska girls just really did NOT do the research on, the extreme surgeries that Mary performs are nothing less than art.  Her development into a cold-blooded, unfeeling sort of crazy that refuses to do anything that isn't extreme and/or painful is a hoot to watch.

This is not to say that the film isn't flawed.  For one, while I love the Soska girls for their vision, they need to either get better at acting or stop appearing in their own films.  Particularly if they're gonna be trying to use fake-ass Boris and Natasha accents.  That shit was nasty.

Second, Beatress' face prosthetic was strange and off-putting.  Not the idea of it because I get that they were going for "plastic surgery addict" but the application.  It seems to me that they could have at LEAST rounded out the nose.

Third, the last 15 minutes of the film were seriously anti-climactic.  There was a TON of build-up to an ending that was... just an ending.  THANKFULLY, the twins didn't actually leave this open for a sequel.  That would have just cheapened it.

But you can safely ignore the last 15 minutes and still have a fucking ball.  I've watched this sucker 3 times already!  If you get a chance to see it either on Blu-Ray, On-Demand or at a festival, do NOT pass it up.

Absolute amazingness.
Posted by BobSmash at 4:18 AM