So, my husband, who hates horror movies, tells me that I need to watch Rubber. 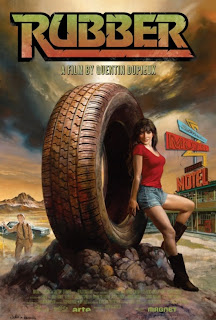 I think my husband is gonna get a smack in the dick.

Don't get me wrong, there are parts of this movie that are enjoyable and the premise is kind of hilarious.  The fact that it shows us more of the talents of Jack Plotnick (Evie in Girls Will Be Girls) is kind of awesome, too.  But, well, it's hard to explain why I kind of hate this movie.

Let's take a look at the plot, first. 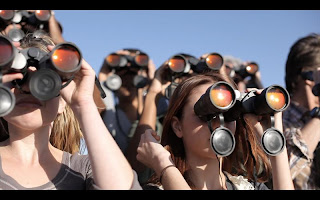 So, first we get this sheriff guy coming out of the trunk of his squad car to explain to us for ten minutes that some things happen in movies for no reason and then a bunch of people are given binoculars to watch "the movie".  The movie is, apparently, watching a tire (named Robert in the credits) inexplicably come to life and destroy things with its psychokinetic powers.  Trust me when I say this movie is kinda gory.

So... in addition to this and the sheriff being both inside and outside of the action of the film, there's the accountant (Plotnick) who's trying to end the movie early by poisoning the audience and a wily man in a wheelchair keeps avoiding it somehow.  Ultimately, Robert is killed and reincarnated as a tricycle who then raises an army of tires to descend on Hollywood. 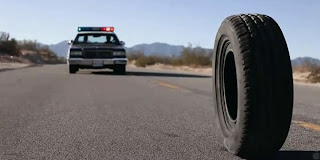 No, I don't care that I just gave away the ending of this movie.

Now, as you know, I'm perfectly OK with foreign films and I will actually use that fact to defend Alien: Resurrection (much to everyone's chagrin) but this is just some strange-ass existential shit right here. 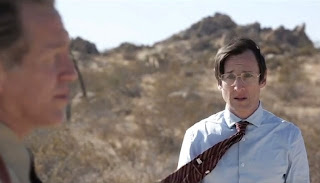 And this guy is not that reason.

Now.  That said.  I don't think it's a bad movie.  I just think it's a movie that lies to us.  It TELLS us that it happens for no reason and gives us a vapid, B-movie plot but then delivers itself in a manner that takes itself entirely too seriously which just ends up being confusing and off-putting.  This is kind of the antithesis of Hobo With a Shotgun which really didn't take itself seriously at all.

I think I need to go watch a real horror movie, now.