In 1964, horror gained a new sub-genre by way of Herschell Gordon-Lewis, the Sultan of Schlock.

Y'ever wonder where we got Hillbilly Horror?  2000 Maniacs!, that's where.  And the face of horror has included cannibalistic slack-jawed yokels with fewer IQ points than teeth ever since. 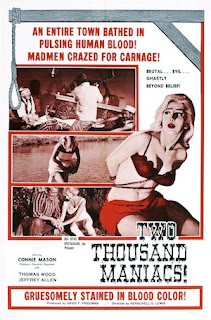 I'm gonna tell you right now, this movie is almost 50 years old.  The statue of limitations for spoilers is WELL past.  Bite me.

So, over the course of 15 days in 1964, the town of St. Cloud, Florida was transformed into the quaint and horrifying Pleasant Valley, Georgia, a town celebrating the centennial of the day Union troops destroyed it.  To assist in their jamboree are 6 Yankee tourists detoured into town to be the guests of honor.  It's rumored that the entire town was more than happy to help out during the filming. 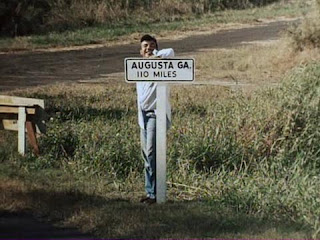 He ain't smart, but he's clever.

The tourists are quaintly separated from one another in a series of banjo-accompanied diversions that ultimately prove to be fatal.  Among these diversions are an axe-dismemberment, a drawing-and-quartering, one man's turn in the barrel (a little kinkier than the version you're used to hearing about in the dirty jokes), and a boulder dropped from a dunk-tank like contraption.

Now, this one might not go over well with the young'uns but this right here is classic splatter.  It's cheap, it's badly written, it's got absolutely NO redeeming social value and it's DELICIOUS.  Herschell Gordon-Lewis may not have been the best director in Hollywood (mostly because he was based out of Chicago) but the man knew what he was doing.  This bloody Brigadoon is hokey, nowadays, but that fantasy/ghost story element is what makes 2000 Maniacs! amazing. 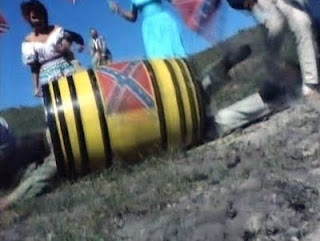 We'll have a barrel of fuuuuun...

Oddly, considering HGL's other works, the acting in this one isn't bad.  It's a little over the top but considering what he had to work with (an actor hired only for his ability at accents and a Playboy bunny), he did good.  If you want BAD acting, watch The Wizard of Gore.  Holy shitballs, that's some painful line delivery.

And, really, this film is kind of an important piece of cinematic history.  During the Civil Rights Movement, TV and film tended to aim toward the comedic interpretation of the redneck because serious depictions of race relations didn't do so well with the ratings but even though race relations are never actually discussed in the film, that vision of the "negro-hatin' Southerner" was quite clear.  With the redneck ghouls lynching the Yankee tourists, we're treated to the nation's view of the South's stubborn refusal of desegregation, perceived social primitivism, history of not-quite-so-legal violence and abject denial that they had, in fact, lost the Civil War.  That's right, South.  You lost.  You can put away the Rebel flag, now.  You're not allowed to secede.

Because those who do not learn history are doomed to repeat it.
Posted by BobSmash at 8:22 AM