I have sinned against you.

I have gone for MONTHS without talking about one of the best horror-comedies ever made! 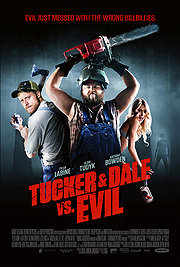 Tucker and Dale Vs. Evil starts with a news report that sees a reporter getting attacked by a mysterious burned figure.  Sounds all ominous and shit, right?

Then, after the credits, we're introduced to the ubiquitous gaggle of college students.  All of them young and pretty, all of them dumber'n'a box o' rocks.  Except for one girl.  But we'll get to her, later.  Their leader, Chad, has issues that become apparent later, too.  You kinda want to slap him right off the bat. 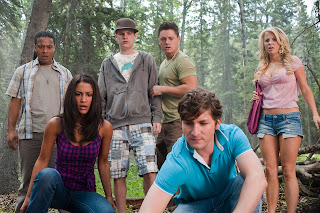 He's the one in the smug blue polo shirt.


And, finally, we're introduced to our heroes, Tucker (Alan Tudyk who seriously needs to get more high-profile work because he's fucking amazing) and Dale (Tyler Labine who is in constant danger of death by cuddling 'cause he's fluffy and adorkable).  They're really well-meaning and eminently unlucky hillbillies who are out to fix up their "vacation home" and they wind up at the same gas station/general store because they need beer and power tools.  This causes problems because Dale gets all twitterpated with Allison (Katrina Bowden) and is all "I cain't talk to no girl, she'll hate me, I ain't worthy." and Tucker is all "You just need confidence!" and sends him over to talk to her with a mouthful of pickled egg and a blank stare.

So, that night, Allison goes swimming but ends up falling in the water and hitting her head.  Dale rescues her but the kids, thanks to Chad, get the idea in their heads that Tucker and Dale are kidnapping their friend to eat her or something... because stringy starving students make for the best barbecue.

And for the next hour, we get to watch idiot teenagers toss around words like "Stockholm Syndrome" and kill themselves off in some of the most amazingly hilarious ways possible.  It doesn't make Tucker and Dale look good in the eyes of the soon-to-be-deceased law but it's awesome to watch. 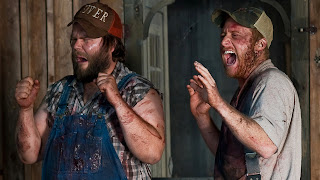 Well... maybe not for these two.

Not since Scream has any film been MORE self-referential and NO film has been a better deconstruction of the killer hillbilly sub-genre.  Tucker and Dale Vs. Evil gives us a smart script and, considering it takes place in the woods which, one more time, still want to kill everyone, it's slick.  It's a thrill-ride that I will gladly take again and again.  And, to top it all off, it's all "You got chocolate in my peanut butter!" when it comes to the humor of the piece.

Humor's been a part of horror for a LONG time.  Something about black humor just puts us at ease and when it's done right, you can turn your audience's fear on and off like a lightswitch, as evidenced by An American Werewolf in London.  Eli Craig needs to give us more of this.  I don't know what he watched as a kid but I'm figuring that it contained a lot of Vincent Price, Peter Lorre and Abbott and Costello because this loving throwback to The Comedy of Terrors and Abbott and Costello Meet Frankenstein is spot fucking on. 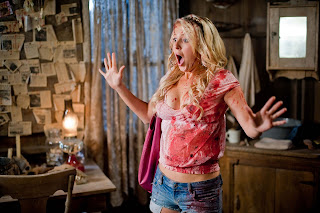 A little club soda'll get that right out.

Finally, there's real heart to this one.  You really do want to give Dale a cookie and tell him that he is kind, he is smart, he is important and send him off to play with his buddy, Tucker.  They're friends who look out for each other and Tudyk and Labine are a perfect pair.

If you haven't seen this, I'm not even sure I KNOW you, anymore.
Posted by BobSmash at 12:30 PM