Ohhhh, kids.  You have no idea how long I've been waiting to write this.  I'm getting goosebumps.

For Tuesday, I watched Hansel and Gretel: Witch Hunters. 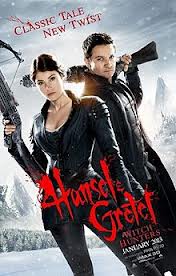 We all know the story of Hansel (Jeremy Renner) and Gretel (Gemma Atherton).  The trip through the forest, the getting lost, the candy cottage, the witch, the oven, right?  Well, this movie takes it a bit further.  I'm sure you probably knew that.

ANYWAY!  So, after discovering through their FIRST encounter with a witch (that bore a VERY close relationship to the witch in Army of Darkness) that the magical powers of witches don't affect them, 'cause that's extra handy and shit, the kids spent the rest of their time rescuing children from the clutches of kindly old ladies who just want a fuckin' snack... errr... I mean kid-eating magical monstrosities.

And apparently there's a damn infestation of these ladies.  They're all OVER the fucking place.  The towns-people in multiple municipalities are constantly losing kids.  It's a wonder there's any population growth at all!  When we get to our main point of action the Sheriff (Peter Stormare, who is ALWAYS awesome) has found a witch and is in the process of sentencing her when the Super Siblings show up and convince the townspeople that she is not, actually, a witch and inform them that they were hired to find a witch that has, thus far, captured several children. 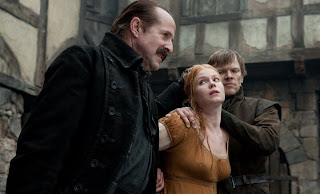 Is it the porn-stache that makes him bitter?

The Sheriff is PISSED at this, by the way, because he wants to run the town but he doesn't.  The Mayor hired H&G, Inc. behind his back so he spends the rest of the movie being a complete prick and getting his face smashed in by Gretel and a few choice others.  During a meeting with the Mayor, Hansel has to take a time out and give himself an injection.  That's right, kids.  Hansel has the diabeetus.  It's a plot point thing.  YAY, the hero weakness!  Sugar is Hansel's kryptonite!

So, what with the bickering and the squabbling and the hey-hey-hey, we, first, get to watch Muriel, the Big Bad (played by Famke Janssen who, barring that whole X3 debacle (Bryan Singer, you OWE me) is a delight to watch in just about everything) kill off all of the Sheriff's men but one whom she sends back as an exploding telegram and we meet the world's first obsessed fanboy.  He's endearing in a creepy sort of way and doesn't have a whole lot to do but he does it admirably. 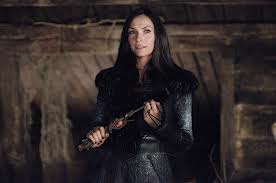 You'd think she'd be thicker, what with all of the scenery-chewing.

We also discover that the girl they rescued at the beginning of the film actually IS a witch but she's a good witch so they weren't able to detect her through their normal methods.  There's also a troll who is so reminiscent of Ludo from Labyrinth that I'm surprised they didn't deliver a cease and desist letter on camera but he's kinda fun in that "lunk-head" kinda way.  And through their powers combined, they find out that the blood moon is on its way and Muriel is looking for a "special ingredient" for a potion that can only be made on that night. 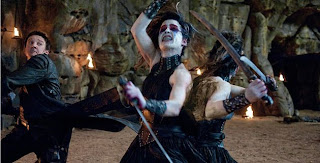 So, the story that I told above, as lacking in details as it is, is pretty much it.  This is some sub-par action movie bullshit right here but it's the WAY that Tommy Wirkola, best known for Dead Snow which is, also, COMPLETELY unintentionally hilarious, gives it to us that makes H&G:WH one of the most awesome reasons for a drinking game, EVER!!

For realsies!  Except for Gemma Atherton and Peter Stormare, EVERYBODY walks through this movie like they're high.  This is not "Sharon Stone in Catwoman" lackadaisical.  This is "Could you at LEAST have spent the money on some fucking Visine for your actors?  That "red eye" shit is distracting."  But it's not distracting in a bad way.  I just kept expecting a running tally of munchie breaks.
You know those diabetics.  Gotta keep up their blood sugar.

But from an artistic point of view, I really have to give Wirkola props for refusing to do a lot of this on a set and wanting to work in the European forest so that it feels authentic.  Well, as authentic as a candy fucking cottage can get.  It was obvious that he had a real vision and,  for the most part, he carried it out faithfully.

If you're looking for depth, though?  Fuggedaboudit.  There is no depth to this movie.  None.  This is a popcorn fantasy flick that gives Hansel and Gretel automatic firearms.  You go in, you turn your brain off and you watch the pretty colors go flying across the screen.  WHEEEEEE!!!  This movie is a handful of cinematic lead paint chips.  It's SOOOOOOO bad for you but it's EXTRA fuckin' tasty.

OH!  And I've been hearing stirrings among the pagan community that there are some people that are afraid that this movie will make Wiccans look bad.

ARE YOU FUCKING KIDDING ME?

This is not "The Burning Times".  You are not descended from 15 generations of Wiccans because Wicca has only been around for 50 years or so.  The Brothers Grimm did not write Hansel and Gretel as anti-witch propaganda.  You do not get to whine away a cultural, and VERY fictional, representation of a monster that has frightened children for CENTURIES because you think it reflects badly on you.  Unless you are in the habit of testing the tensile strength of gingerbread and candy canes and swapping infant-kebob recipes with the neighbors, you have nothing to worry about.  If you REALLY think that this movie is going to have people gathering firewood, rope and lawnchairs to watch your screaming death, you need to reevaluate some life choices.  (Although if you continue your irrational whining, I'll give you something to whine about.)

Get over yourself and just watch the fuckin' movie.  It's FUN!

I'ma go get me some gingerbread and put M&Ms in my popcorn!!