OK, kids!  I had a ton of fun with the other bloggers and we're already planning our next event so keep an eye out for that but, for now, we're back to business as usual. 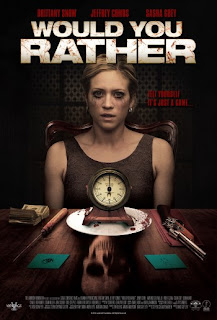 Iris (Snow) is taking care of a brother with leukemia and is having a rough time of it, financially, because, seriously, if she wasn't, this movie would be fucking pointless.  She gets invited, through her brother's doctor, to a dinner at a local philanthropist's house (Jeffrey Combs, who still excels at gnawing on the scenery) that promises to get her the money she needs to save her brother's life.

And for the next hour and a half, we get to see the idle rich work their painful wiles on the poor and the poor play right along, ditching their morals and sense of right and wrong along the way.  Because humans are weak idiots. 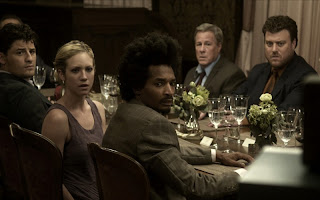 Plot-wise, there's not a lot more than that.  A bunch of people are required to torture each other because a depraved and bored rich dude and his doubly-depraved, rapist asshole of a son want the poor to beg for their help and they LITERALLY say this during the course of the game.  Because that is what rich people do.

I assume that's what rich people, do, anyway.  I'm not rich so all I get to do is live with my fantasies of rich people staging hobo fights and feeding puppies to the great white sharks they keep in aquariums and blaming their losses in profits on the fact that we would like a living wage, please, and kinda getting off on making us sing "Food, Glorious Food" as they shoot rubber bands and flaming twenties at our faces.

Apparently, rich people hire butlers that used to be government interrogators and know where and how to hide bodies, too.

ANYWAY, I know that a lot of people are giving this movie mad props but, seriously?  This is dry white toast.  It's INTENSELY fucking bland and it hurts going down.  For a first time out producing, Ms. Snow should have known better.  She's done some great things (Pitch Perfect) and she's done some things we'd rather forget (Prom Night).  She should know by now what the public wants to see. 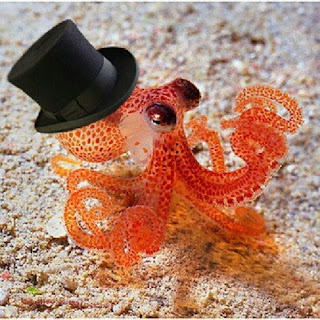 As a social commentary it's OK.  I mean, there's really no tactful way to say what director David Guy Levy (who seems to be pretty damn pretentious what with insisting on the use of his middle name) is saying.  The rich are cruel and merciless and in order for us to get them to give up their not-so-hard earned cash we need to be prepared to give up our morality and revolution against the rich doesn't work when you don't have the resources to fight them.  I don't personally believe that but there is truth to it on some level.  Would You Rather certainly gets the message across in an anvilicious sort of way.

Anvilicious:  When some form of social message in film is about as subtle as dropping an anvil on your head.

Look at that!  You learned something!  Awesome.

The acting in Would You Rather is... well... creamed chipped beef on toast.  You don't want to eat it but it's right there in front of you and you're hungry.  It shouldn't go to waste. 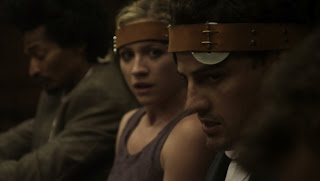 This is the best way to prepare bad actors.  Mmmm... tender.

Considering that most of the film takes place in one room with the actors being your main focus, you would THINK that we would be witness to some Oscar-caliber performances but, no.  They barely kept me interested and, frankly, I was more interested in watching the jerks (conveniently sat on the left-hand of the host (the sinister hand, if you will)) get injured. (Iris gets moved over there at one point... it's all meaningful and shit.)

Even considering the downer ending wherein the rich bad guys definitely win, I'm kinda thinking that Ms. Snow should have spent her money on better projects.  Also?  I'm thinking we need to get back to monsters or slashers for a while because if Vile is a better movie than this with an unknown cast and a micro-budget, then we need to start leaving torture horror alone for a bit.

Unless, of course, we're going to start remaking the Roger Corman/Edgar Allen Poe flicks like The Pit and the Pendulum.  Because that would be fuckin' amazing.

(UTTERLY UNRELATED SIDE-NOTE!  If any horror bloggers that follow me would like to get in on a blogger community that includes avid and active networking, let me know.  I got the hook-up, yo.  I like letting people know about the cool stuff.  You kinda have to be prepared to reciprocate, though.  Sharing is caring.  ;0-)  )
Posted by BobSmash at 11:51 AM

Email ThisBlogThis!Share to TwitterShare to FacebookShare to Pinterest
Labels: bad, bland, creamed chipped beef on toast, horror, review, snark, Would You Rather