Here. Have a Slice.

OK, KIDS!  Back on the damn horse.  Please note, I am typing this with a head full of Vicodin and my grammar may go all cattywumpus and run-on sentences may play in heavily.

Netflix, lately, is a grab-bag full of awful.  You reach in and you're lucky if you don't get hepatitis or lead poisoning on the way out.  That's why I was a little surprised to find Slices of Life. 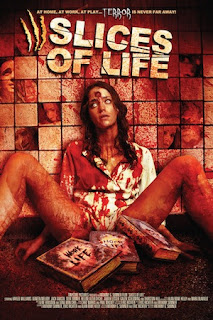 This indie gem does, in fact, bring me the wooden acting and audio problems that I so abhor but it also brings me ex-porn actors in see-through plastic rain gear and since half of my life is led by my penis, I'm perfectly OK with that.

Slices of Life is an anthology which means that you actually get three chances to suck out loud instead of one.  The law of averages says that at least one of these segments will be good enough to talk about but the other two should be bland and boring something fierce.  Please note that this particular set of averages only applies to indie films.  Studio anthologies tend toward the awesome.  Tales from the Darkside: The Movie, for example, wins solely due to the presence of Debbie Harry, because Blondie is awesome-sauce.

I don't have a picture of Debbie Harry so pretend there's one right here.

ANYWAY, this anthology deals with the horror of the everyday.  We find a young woman passed out on the lawn of a motel.  She could be Lindsay Lohan.  Who knows?  We don't.  She certainly doesn't.  Let's pretend she is.  Anyway, she's set behind the desk of said motel because she... runs the place?  Maybe?  And she tries to put together the pieces of her mind with three sketchbooks.  Each flesh-bound book tells a different story. 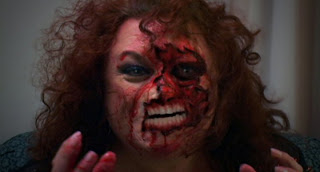 Work Life:  A lonely basement-dwelling nerd is trying to find love in all the wrong places and sets off the nano-bot zombie apocalypse. 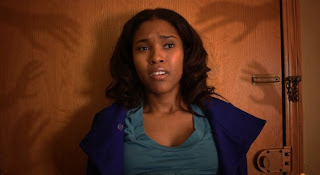 
Sex Life:  While escaping sexual abuse at home, a brother and sister look for refuge only to find... ummm... not... refuge...

And all the while Amnesia-Lady thinks she's seeing these people milling about the motel.  WOOOO!  Cheap-ass mind-screw! 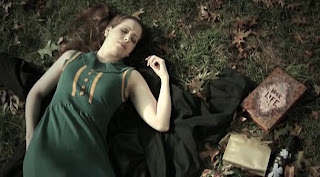 Yeah, I kinda wanted a nap, too.

It's not really that bad.  For folks I've never seen before, they do rather well.  They're a little stiff but they're new.  Considering the content I'll allow it.  The audio still sucks, though.  Maybe that's WHY they're so wooden.  They have to emote loud enough for the suck-ass microphone to pick up their lines over the freeway next door because SOMEBODY didn't invest in a fucking microphone cover-thingie.

And, yes, since it's an indie film, there's tits everywhere.  Because for some dumb-ass reason, fanservice is a necessity in indie-horror.  Somebody needs to get in on the fact that there are female and gay male horror fans if you know what I'm sayin'.  Not that anybody needed to see Roger Bart get his tallywhacker whacked in Hostel 2 but I digress... 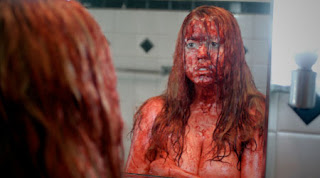 ANYWAY, it sounds like I'm complaining about this piece but I'm not.  This did not suck.  I was actually kind of pleased with it.  It made great use of the anthology format, gave us a nifty twist at the end and the stories (except for Home Life which ran slow) were engaging and fun to watch.

Pay no attention to the slab of beef in the raincoat.  I never expected big things out of him, anyway.  No, really.  Steroid use.  Shrinkage.  No big things, no way, no how.

When you get a minute, give this one a try.  I don't think you'll be disappointed.
Posted by BobSmash at 11:11 AM