What Did I Tell You About The Dead Broad?

Gather 'round kids while Uncle Bob tells you a little story about one of the most fucked up movies he's seen in a long time.  It's got drama.  It's got intrigue.  It's got teenagers.  It's got an abandoned mental hospital.  It's got Noah Segan.

And it's got necrophilia.  Eew. 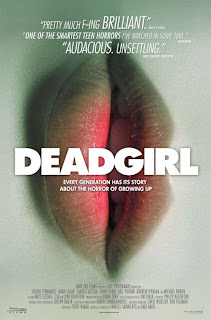 So, like any good coming-of-age horror story, the movie begins by introducing us to Rickie (Shiloh Fernandez) and J.T. (Segan), two slackers that apparently can't get with the ladies.  Because in Hollywood, the nerds are attractive.

And because these two are kind of immature, they spend their afternoon playing hooky and rooting around in the abandoned mental hospital.where they find a naked woman wrapped in plastic and chained to a table.  At which point, I would call the police but these two are fucking idiots. 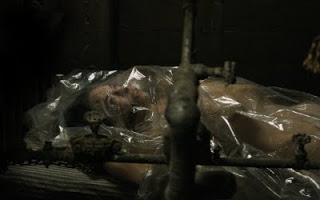 J.T., who apparently is a sicker motherfucker than we at first imagined, decides to keep her,  Like a pet, only the kind of pet that's chained in a basement and fondled inappropriately.  He discovers that she is not quite alive through the auspices of trying to kill her.  Because J.T. is, again, more twisted than a forkful of linguini.  He nicknames her "Deadgirl".

Over the course of the film, we find that J.T. is pimping the zombie out and he gets himself scratched after Rickie lets one of her hands free.  It's at this point we find out that whatever this chick's got is contagious.  Because what fun would it be if it wasn't?  Ain't no point in a zombie apocalypse if'n there's only one zombie.

ANYhoo... While J.T. sticks his dick in the corpse, without, I'm sure, the benefit of douching, Rickie asks the lovely and unattainable JoAnne (Candice Accola) out.  Her boyfriend then proceeds to beat the snot out of Rickie and Wheeler (Eric Podnar), the other dude that spends his spare time poking the corpse with dicks, who proceeds to blab his fat fucking mouth about Deadgirl at the top of his lungs.  He refers to her as "our own fucking whore" which I'll get into later.

Long story short, J.T. and Wheeler decide that this one's worn out her welcome and they need to make a new Deadgirl and they pick JoAnne because revenge, duh.

SO.  Let's dig into why this movie is awesome, shall we?

First off, this is SUPERBLY acted for an indie film.  Noah Segan always plays a razor-sharp crazy.

Second, like all of the great zombie movies, it examines a few societal horrors that SERIOUSLY need discussion in this country and, really, the world.  It touches on bullying and the role of outcasts in our youth and doing stupid things as kids that we wouldn't get away with as adults (which leads to JoAnn telling Rickie to "Grow up" at the end) and all that touchy-feely crap that a lot of horror movies already examine but what it focuses on, with a fucking microscope, is rape culture.
The fact that these kids, and, yes, they are children, feel that it's OK to take advantage of what they think is a helpless woman is utterly abhorrent.  The fact that she carries a fuckin' zombie virus is the director telling us that these kids WILL be punished for their actions and since that virus won't allow a person to die, they will suffer for a very long time... or at least until they get the double-tap to the head. 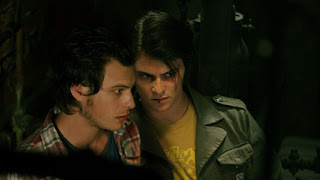 Why wait?  Douchey haircuts should always earn a double-tap.

Considering the recent Steubenville trials (in which the sentence was woefully inadequate), every person should be watching this movie, right now.  Every, single, last one of us.  We should watch it, not only because it's a superb film, but to showcase rape culture and instill in our society that rape is not, ever, OK.  It shouldn't HAVE to come to a horror movie to do this but if it works, it works.
Every boy needs to be taught, from BIRTH, that it is not cool to refer to a woman as a whore.  Every boy needs to be taught, from birth, that unless a person gives permission, it is not OK to park your dick in them.  Every boy needs to be taught, from birth, that there is NO situation that alters the last statement.  There are no qualifiers to rape.  It doesn't matter if a person is doing cartwheels nude down the boulevard, if they say no, it means no.

Sorry about the rant but this is 2013, not the fucking Bronze Age.  We, as a global society, need to, as JoAnne says, grow up.

Watch the movie.  You'll learn something.

I'm gonna go watch something to calm down, now.
Ooh!  Beetlejuice!
Posted by BobSmash at 11:59 AM