Emoticons Are of the Devil

The internet.  A wondrous thing.  From ARPANET in the 60's to BBSs to MUDs to Hypertext Markup Language to XML and MMOs, the internet connects us to the world outside our stinky basement lairs in ways we could never have imagined a hundred years ago.

And then some asshole makes a horror movie about video chat. 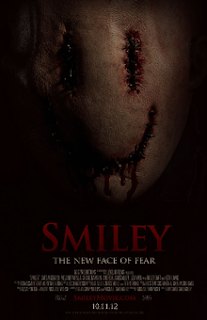 So... there's this internet legend (kind of like an urban legend but on the internet, like the Nigerian prince email and all of those stupid "hit Like and we'll give you an iPad" things on Facebook) where if you type in "I did it for the lulz" three times in video chat, you get to watch this Smiley fucker come in and murder the person you're talking to in Chat Roulette.

Because murdering complete strangers is a hobby EVERY internet user needs to cultivate.  It's like stamp collecting, only horrible. 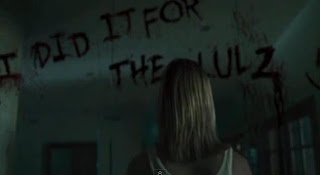 Aren't you glad you didn't turn on the light?

So, this girl does the whole internet Bloody Mary gig with her friend and she's freaked when the chat pertner is stabbed repeatedly but the girls decide not to go to the cops.  Because they're fucking dumb.  And then they go to a party where Idiot Girl gets drunk and runs into Smiley whereupon she wigs the fuck out and goes to the police only, duh, the police don't believe her and her friends are dropping like flies.

Only...  not?  YES, I'm giving away spoilers.  Suck it.  Yeah, this is all a big fucking "Anonymous-like" hoax designed to scare people.  Nobody dies except one girl at the end who's talking about Smiley since she was one of the idiots pranking Idiot Girl in the first place and we can't even confirm that.  Idiot Girl is shown to be alive after the end credits, anyway. 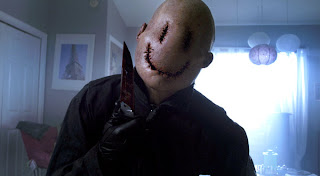 FUCK ME, this movie was bland.  There was a fantastic idea, here, and Michael Gallagher, who needs to stick to directing YouTube shorts, did absolutely nothing with it.  Nothing.  There's not enough gore for the gorehounds, there's not enough suspense for the suspense fans, the action goes "murder, cops, denial, murder, cops, denial" for about an hour and a half and the fact that there's a group of spoiled internet "hacktivists" committing fake murders has less bite than any other Scream imitator, ever.

For realsies, I like Final Destination 5 better than this barker.

I blame this kind of lazy film making on permissive parenting and "everybody's a winner" upbringings.  You're not a special unicorn princess, Michael Gallagher.  If you want a successful film, you actually have to work for it.  Just because Mommy will hang this trash on the refrigerator doesn't mean it's good.  In fact, it makes me want to take your juicebox and squirt it in your face and take the Twinkie out of your lunchbox.  I would never DO that because I hate bullying but I WANT to and that makes me sad.