Hey, sorry for no notice on this, but Disturbing Films is holding their third annual Zombie Week so I'm all contributing and junk!  WOOOO!

Oh, Bob Clark.  What in the world would we do without you?  Why, if it weren't for you, we wouldn't have the 1972 B-Grader bomber, Children Shouldn't Play With Dead Things. 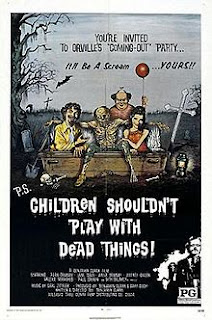 Oh, MAN is this a barker.

So, the movie starts with a cemetery caretaker being attacked and a corpse being replaced with what appears to be another, this time ambulatory, corpse... it's very surreal.  Then creepazoid Alan takes he theater troupe (who he calls his children... eeeeew) to an abandoned island cemetery for some macabre "fun".  Fun for him, anyway.  His troupe probably should have gotten the hint that this guy was an ass when he asked them to exhume a corpse.  After the troupe turns on him, for using a couple of cast mates to play a "living dead" joke, Alan berates his cast and uses the legit corpse they replaced to play sick jokes on this "friends" and threaten their jobs until he decides to hold a seance from a "grimory" because he can't pronounce "grimoire".  It doesn't take long to realize that the ritual actually worked and the dead have risen.  They (as with any good zombie movie) take shelter in the "old dark house" and have to decide if they run for help or stay put. 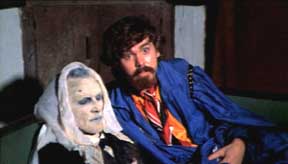 OH.  MY.  GAWD.  I haven't seen this much scenery chewing since Night of the Lepus.  Let's forget about the fact that these people actually KNOW Alan and probably shouldn't have followed him to the island cemetery in the first place but DAMN!  I would have found another job.  Ain't no fuckin' way.  And, seriously?  Grave-robbing?  The stink alone should have driven the sensitive actors running to the hills. And these "jobs" they have.  They're likely local theater wages in 1972.  I'm fairly certain that panhandling pays more.  Why are they so worried about losing them? 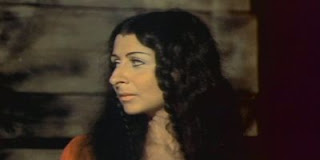 And, really?  Taking the corpse back to the cabin to party a la Weekend at Bernies?  Making the troupe apologize TO THE CORPSE when they SHOULD be burying the stiff where he belongs?  Stupidness.

I just really can't go on anymore.  This is HILARIOUSLY bad.  Frankly, all of these idiots get what they deserve for being dumber'n'a bag o' hammers.