So... How's Priesthood Workin' For Ya?

While we're on the subject of both classic horror and religious horror, I would be UTTERLY remiss if I neglected to mention William Friedkin's 1973 horror Magnum Opus, The Exorcist. 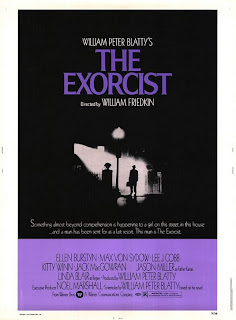 This movie had me OBSESSED as a kid.  I always wanted to watch it and this was the one that my horror-hound mother would never let me watch and I never understood why.

After finally seeing it in my late teens, I understood why, but I'll get into that later.

Once again, this is a classic so I'm not particularly worried about giving away spoilers but consider yourself warned, anyway.  The movie IS almost 40 years old, after all.

So, anyway, it starts with Max von Sydow (Father Merrin) hanging out at an archaeological dig in Iraq and discovering that a demon he'd already fought, Pazuzu, is out for revenge.  Then we peek in on a younger priest (Father Karras) who is going through a crisis of faith following the death of his mother.  And finally, we get into the action with Chris MacNeil and her daughter, Regan.  Regan's been going through some... changes... since she decided to fuck around with a ouija board.  (Because ouija boards are the cause of every spiritual problem EVER.)  Changes like soiling herself at grown-up parties, developing a mouth on her like a fucking longshoreman, some SERIOUS acne and Carrie-like tendencies to toss her bed around the room.  She's also developed a new imaginary friend by the name of Captain Howdy. 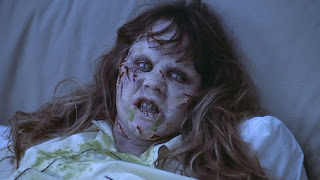 Somebody needs some fuckin' Pro-Activ. 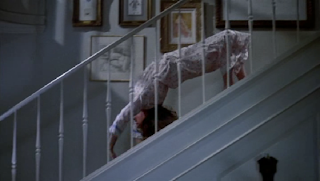 Those Gymboree classes TOTALLY paid off.


And then the whole thing blows up when Regan is under suspicion of killing Mom's boy-toy.  She totally did it but the cops aren't convinced so they're "investigating".

So, on the doctor's advice (wait.. really?), mom hunts down Father Karras who initially refuses to take the case but changes his mind after he sees "HELP ME" carved into Regan's skin.  He gets help from Merrin and they go to town, dealing with pea-soup vomit and the physical impossibility of a head turning 360 degrees. 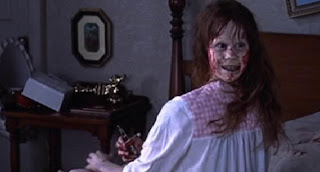 
They actually fail on the first go-'round.  Merrin kicks Karras out but when Karras checks in on Merrin, he finds him dead, so he has to complete the exorcism himself.  He basically dares the demon to take him and leave Regan alone, so it does and he kills himself by jumping out the window.

WOO!  The day is saved and Regan doesn't remember a second of it... or so she says. 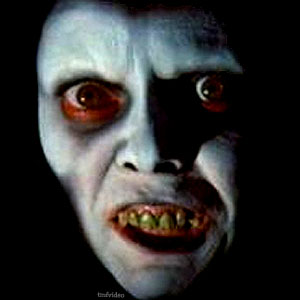 Now, let's talk about why my mom didn't want me to see it when I was young.  It wasn't the violence or gore.  It wasn't the creepy masturbation scene (which was cut out for a long time and only re-added recently).  It wasn't the language Pazuzu uses.  It was this:
I wouldn't understand it.  There is entirely too much about the movie that is SO wrapped up in Christianity that, unless you have spent your entire life, from birth, in a monastery, a small child just cannot comprehend it.  Hell, I had to do some research after the fact to figure out a lot of what happened in the film.  Then again, I'm a dork that way.  This is obviously the premiere "exorcism" film and it's certainly what a lot of folks base their vision of an exorcism on and it was very deeply researched by William Peter Blatty before he wrote it. 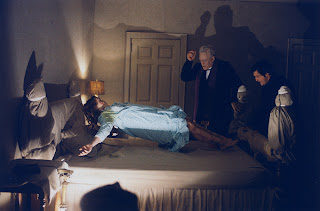 DAMMIT!  STOP FLOATING!  BAD REGAN!  BAD!
The Exorcist is one of those "based on true life" movies that has only a very tenuous connection to actual events, but I'm OK with that.  I don't believe in demonic possession due to my being an atheist but it certainly raised questions like any good movie should.  It's because of the imagery included, the rumor of subliminal imagery, the rumor of a movie "curse" and the utter divisiveness in theological doctrine vs secular humanism that this movie is an indispensable part of any horror fan's collection.

Frankly, this movie takes a long time to get where it's going but once it gets there it doesn't stop.  It's not as slow a burn as Rosemary's Baby but be prepared for a numb butt.

Totally funny story, though... I went to see this in the theater when the uncut version was released.  I was in my thirties.  A young couple in front of me apparently thought this was an appropriate movie for an 8-year-old.  I thought it was hilarious when they up and left during the crucifix-twat-stabbing scene.  Apparently, they didn't think this life choice through.

Idiots.
GET A SITTER!

I swear, some folks need to pass a test before becoming parents.
Posted by BobSmash at 1:31 PM