What Part of "No" Do You Not Understand?

In 1989, Stephen King and director Mary Lambert brought us yet another tale of family terror.  One that still resonates today because undead children are just fuckin' creepy. 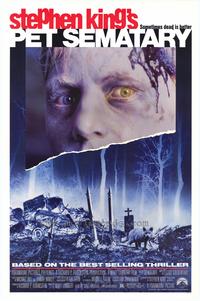 Pet Sematery is a tale of adult fears.  It examines those things we, as adults, face every day.

It starts with the Creed family (Louis, Rachel, Ellie, Gage and their cat Churchill) moving into their new home in Ludlow, Maine.  They befriend their new neighbor, Jud Crandell, right away and settle in.  Much beer is consumed by the new buddies and Ellie and Gage basically gain a new set of grandparents.  Because children need as many people around to manipulate with cuteness as they can get and old people are gullible.

Louis is a doctor and he has a new job at the University.  A young man is brought in with severe injuries and, because he's apparently a dick, provides the doc with a prophetic warning to stay away from the pet cemetary.  And then he shows up in a dream to warn him again and Louis wakes up with dirty feet.  I'm sure that pisses him off because who wants that on their sheets?  Stupid sleepwalking.  Not being concerned about hygiene and shit.

Then their asshole of a new neighbor takes them to the homemade pet cemetary in the woods.  Kids have been burying their dead pets there for DECADES, it appears and Jud warns them not to try and climb the pile of dead trees in the corner.  You would think that Louis would pay attention but noooooooo. Not only do we have to deal with Louis' weird dreams but Rachel is terrified of death.  Like, serious, irrational, whoa-hold-up-bitchfest, do not expose my daughter to death, phobia.  It's understandable since she watched her sister Zelda die of Spinal Meningitis while her parents were away.  And Zelda is quite possibly the scariest character ever portrayed on film.  She freaks my shit right the fuck out.

Anyway, did I forget to mention that they live on a not-well-lit two-lane highway that's notorious for killing pets because tanker trucks use it constantly?  It claims the life of poor Churchill. 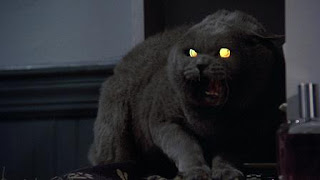 So, other than stinky cat, things go great until Gage is also killed by an oncoming truck.  Rachel's father blames Louis.  There's a fist-fight at the funeral.  Rachel goes nuts and takes Ellie to Chicago where Ellie starts having disturbing dreams of the student that died on Louis' watch.  Louis exhumes Gage and buries him in the Micmac burial ground.

And now he wants to play with yoooooooouuuuuu. 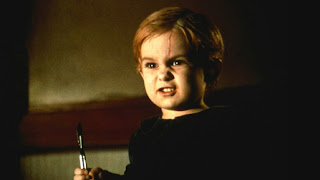 Seriously, when it comes to Stephen King adaptations, this is one of the best, even though the novel isn't one of his better ones.  Mary Lambert managed to cram a whole lot of novel into the movie which was totally appreciated.

But the reason this is such a good movie is because of the adult fears I mentioned above.  Kids are afraid of losing pets and adults are afraid of losing children and spouses.  They say that to be a parent is to live every day in fear.  Frankly, I have enough fear in my life so I don't really WANT to be a parent but I can imagine what losing a child must feel like.  The imagery of Gage's poor little foot in his baby sneaker bouncing along the road was chilling. 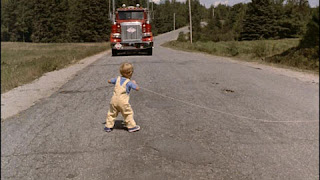 Losing a spouse is just as painful and Rachel's return was horrific.  We KNEW that he was cheating death and was going to pay the price.

And turning a sweet innocent child into a demonic villain is another fear that many parents must face.  Because puberty is a bitch and parents often have to deal with mental illness and obstinate children all the time.  Granted, Gage doesn't fit the puberty/mental illness profile but, as above, Louis was cheating death and he really should have known better after that damn cat.  He REALLY should have expected some kind of Night of the Living Dead bullshit.

It also has the distinction of having a female director.  Mary Lambert isn't the first female horror director but she's certainly the best and she made a fantastic choice in making this her second film.  I'm kind of sad that her career has been relegated to Urban Legend sequels and Syfy Original films.

All in all, this isn't a great movie but it IS quietly awesome in it's own way.  With its Lovecraftian themes (which are common in King's work), it's complete avoidance of the infant immortality rules and its understated examination of death and how we, as people, handle it, it's certainly a welcome addition to any horror fans library.