No, I'm not taking a break.  Even though I'm performing in a charity show in four days and I'm really nervous and I'm 'bout ready to die.

I'm actually talking about Spring Break.  That time of year that lets wild, drunken college kids loose on an unsuspecting society.  The baseline level of debauchery that enables slasher films.  Boobs and booze fuckin' EVERYWHERE!!  The days of illegal narcotics and tourism.

And so begins my review of Alexandre Aja's 2010 B-Movie awesomeness, Piranha 3D. 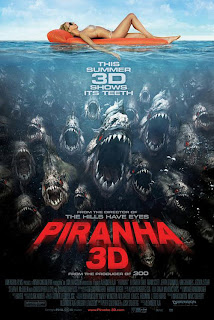 In a shout-out to Jaws, Oscar™ Winner Richard Dreyfus gives us a cameo as Matt Hooper who is now a belligerent drunk, fishing, humming "Show Me The Way To Go Home" and drinking beer when an earthquake hits Lake Havasu, releasing a school of prehistoric piranha and a huge whirlpool which, for some dumb-ass reason, refuses to actually lower the water level of the lake when it empties into the new set of caverns.  And why the fuck is it called a "school" of piranha?  Because they're fish?  Isn't that all kinds of fish-racist?  Do all kinds of fish look alike to you, Aja?  Is that what you're trying to say?  Henceforth, a school of Piranha shall be known as a "Nibble".  Take that, you racist bastard! 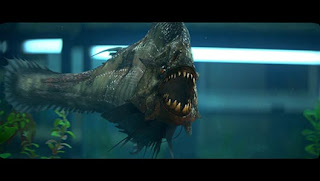 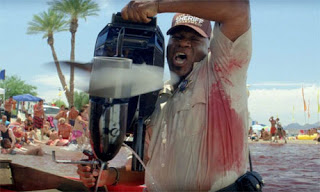 Ving Rhames with an outboard mower.  You're welcome. 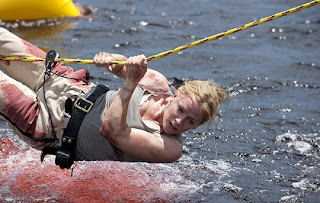 Yep.  Safety harness.  Because that's gonna be on every boat, ever.

This movie?  You would think that I hate it but I totally don't.  This is yet another movie specifically made to be a horror comedy and I LIVE for it!  Remember that the original was meant to be a Jaws spoof, too.

It tosses us pretty much ALL of the "terror on the ocean" tropes and confines them to a lake.  It gives us a mad scientist, and "Oh, no, there are THOUSANDS of them and they're unstoppable!"  It gives us Michael Bay levels of mayhem!  It gives us Elizabeth Shue trying to pay the mortgage!  There's carnage and mayhem and it's pretty much a consistent roller-coaster ride the whole way through.  EXPLOSIONS!!  Aja totally knows how to deliver both the gore AND the shock.

I probably could have done without the underwater ballet but whattayagonnado?

Finally, I DID pay the $13 bucks to see this in the theater.  The 3D for this felt right.  It wasn't tacked on and the creature effects were kind of amazing.  I'm not quite sure how those fish would actually swim but they worked for me.  They had an almost intelligent malevolence to them.  I like them.

This is silliness-on-a-stick and I adore it.  You don't gotta.
Posted by BobSmash at 12:42 PM