Things NOT To Do On A Mexican Vacation

Brace yourselves, kids.  I'm about to review one of those "Love it or Hate it" movies.

You all know how much I love the Man-Eating Plant and I did mention this film a while ago and meant to review it earlier but you know how things go.  Work, life, making sure your neighbors don't notice the smell... stuff like that. 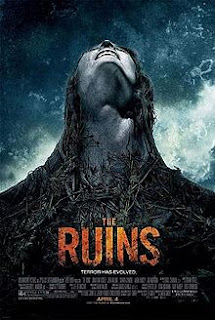 So, yeah.  The Ruins starts out in Mexico with two young couples on vacation.  The guys make friends with some German guy (because German dudes in horror movies are ALWAYS the safest people to hang with) and decide, on the last full day of their vacation, to help him and his other buddy try to find his brother who was led to a Mayan ruin by archaeologist poon.

And they get to the ruins, right, and are immediately harassed by Mayan natives that, for some inexplicable reason, do not speak Spanish or English, because fuck you, tourists, and are forced to climb the pyramid to escape rocks and arrows, because fuck you, technology.


When they get to the top, they hear a cell phone so German dude shimmies down a handy-dandy rope to look but the rope breaks and so does his back and legs.  Fortunately, one of the guys is a med student so he's all, "Bring him up here but try not to move him too much.  Go ahead, girls, I'll be waiting up here."


Overnight, one of the girls discovers some vine on her leg.  No big thing, right?  Then they check on German dude and discover that the vines have eaten his legs down to the bone.


THEN, they hear the phone again and the girls take another trip down the shaft.  They, in effect, get shafted. WOO!  Anyway, while they're down there, they notice that the sound isn't coming from a phone, it's coming from the plant which has, somehow, evolved the ability to mimic sound and is ambulatory enough to physically attack the girls.

One of the girls gets convinced, due to dehydration or panic or whatever, that the vines are growing inside her.  Her friends are all, "Nooo, Meester Vine no here" but they are totally wrong.  Because this is a horror movie and fantastical things happen all the time in horror movies.  She spends a good chunk of the movie going hysterical and accusing her friend of cheating with her boyfriend (because she's done it before) when, you know, she's right there and she knows that the plant can mimic sound and, finally, cutting huge swaths of her own flesh to pull out the vines that ARE SO TOTALLY CRAWLING UNDER HER SKIN like big, ole green parasites. 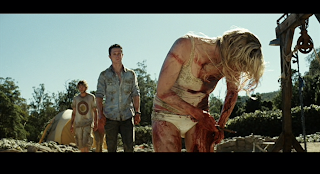 Just one more and I can go back to being a crazy woman.

Words are said, hands get slashed, boyfriends get stabbed, fun for the whole family!

Now, I don't know about you but, personally, I think this movie is the best of both worlds.  It's totally b-grade trash but it does have a certain artistry to it that transcends its trashiness.  The Ruins kind of makes you watch it with this "I'm sexy and I know it" air that says "I know I'm brain candy but I'm TASTY and you can't resist me."

And it's not like it's a bad movie at all.  In fact, I think it's a GREAT movie.  There's enough backstory on the characters to make them interesting, there's enough gore to keep us cringing, and, for once, we have a mostly realistic man-eating plant in a horror film that doesn't require that much suspension of disbelief.  It's like Little Shop of Horrors and Day of the Triffids had a baby and gave us this unstoppable wall of anthropophagous foliage.  Well, kind of unstoppable.  They DID keep it contained by salting the earth around the pyramid and killing idiot trespassers with rocks and arrows.

That is not to say that we don't still basically have five characters that are subject to the whims of the greenery but, hey, since when is that a concern?

Personally, The Ruins is a favorite but I also know that I'm weird so there you go.

That IS how it works, right?
Posted by BobSmash at 3:58 AM